I was busy yesterday with a move of my household goods so missed the festivities in D.C. yesterday. From what I can gather, though, it was a re-run of the last several dozen protests dominated by the usual suspects.

Thousands of protesters against the war in Iraq rallied today in Washington and other U.S. and European cities to demand the return of U.S. troops in what organizers hope will be the largest gathering since the war began more than two years ago. Protest organizers estimated a crowd of about 200,000 rallied at the Ellipse, then marched around the White House and along Pennsylvania Avenue. Police downgraded the count to about 150,000. The crowd thinned when a misty drizzle began before the afternoon concert on the Washington Monument grounds.

D.C. police and U.S. Park Police said there were no significant problems during the demonstrations and reported three arrests — one for destruction of property, one for attempted theft, and one for disorderly conduct. Police said all three incidents stemmed from the tearing-down of a construction fence and the destruction of a newspaper box in the 1000 block of 11th Street NW. Police said that some windows were broken at 13th Street, just south of L Street.

The antiwar activities occurred on the same weekend as the fall meetings of the International Monetary Fund and World Bank, which drew several hundred activists who criticized the organization’s policies as detrimental to the world’s poor.

Protesters came from around the country to the nation’s capital, arriving on buses, planes and in cars, carrying signs that read “Bush Lied, Thousands Died,” and “End the Occupation,” among other messages. “We believe we are at a tipping point whereby the anti-war sentiment has now become the majority sentiment,” said Brian Becker, national coordinator for ANSWER, one of the main antiwar groups coordinating today’s events.

Crowds opposed to the war in Iraq surged past the White House on Saturday, shouting Ã¢€œPeace nowÃ¢€ in the largest anti-war protest in the nationÃ¢€™s capital since the U.S. invasion. The rally stretched through the day and into the night, a marathon of music, speechmaking and dissent on the National Mall. Police Chief Charles H. Ramsey, noting that organizers had hoped to draw 100,000 people, said, Ã¢€œI think they probably hit that.Ã¢€

Speakers from the stage attacked President BushÃ¢€™s policies head on, but he was not at the White House to hear it. He spent the day in Colorado and Texas, monitoring hurricane recovery.

In the crowd: young activists, nuns whose anti-war activism dates to Vietnam, parents mourning their children in uniform lost in Iraq, and uncountable families motivated for the first time to protest. Connie McCroskey, 58, came from Des Moines, Iowa, with two of her daughters, both in their 20s, for the familyÃ¢€™s first demonstration. McCroskey, whose father fought in World War II, said she never would have dared protest during the Vietnam War. Ã¢€œToday, I had some courage,Ã¢€ she said.

While united against the war, political beliefs varied. Paul Rutherford, 60, of Vandalia, Mich., said he is a Republican who supported Bush in the last election and still does Ã¢€” except for the war. Ã¢€œPresident Bush needs to admit he made a mistake in the war and bring the troops home, and letÃ¢€™s move on,Ã¢€ Rutherford said. His wife, Judy, 58, called the removal of Saddam Hussein Ã¢€œa noble missionÃ¢€ but said U.S. troops should have left when claims that Iraq possessed weapons of mass destruction proved unfounded. Ã¢€œWe found that there were none and yet we still stay there and innocent people are dying daily,Ã¢€ she said.

As usual, crowd estimates vary wildly. Also par for the course, the rally is depicted as a collection of grandmas and thoughtful Americans even though it is organized by the radical fringe.

Michelle Malkin attended the event and describes it as “haze of hemp-scented paranoia, steeped with fetid Bush hatred.” She has a photo collection of some of the more colorful demonstrators, including the one on the left.

Kris at Libertarian Republican has his own photo collection, including the one on the right. Juliette Ochieng has similar photos taken at a simultaneous rally in Los Angeles. Taken in isolation, they’re probably no more representative of the march than that of the grandmas shown in the AP/MSNBC photo or the teenager concerned about hurricane victims accompanying the WaPo piece. But one wonders why the mainstream press presents the rally as if the kook brigade was not a major component.

Jeff Goldstein thinks he knows the answer. Commenting on the vignette featuring the Rutherfords in the AP story above, he writes,

Only in a story that is desperately trying to hide its bias would the author find, foreground, and quote, as her initial interviewees, a couple who are surely the least politically representative of all those attending this rally: a pro-Bush Republican tandem so unversed in the AdministrationÃ¢€™s reasons for being in Iraq that they believe we should pull out before the mission is completed, and are basing that belief on a tired liberal talking point that conveniently ignores all the other reasons the Bushies outlined for the Iraq campaign. So, while Ms Kerr is certainly correct to note that political beliefs among the rallyers varies, her choice to highlight the most unrepresentative of the variants to open the story betrays her own rhetorical agendaÃ¢€”and does so in a way that is so obvious IÃ¢€™d be surprised to learn she thought it might actually fool anyone.

Clearly, the fact that most reporters sympathize with the anti-war cause makes them less likely to focus on the sizable fringe element of these protests, just as those of us who support the war likely focus too much on the nuts.

Clearly this was a day to come out and protest whatever the heck had gotten under your skin. Makes one think they should have united under one banner, found one common denominator that would have aggregated all the causes together. We can see the message on the banner now: “Whatever”.

Almost all mass protests are of that variety. Some genuinely oppose the war, others hate everything George Bush, others fear global commerce, some just want to be seen and heard, a few hate America in general, and others just love the atmosphere. In that sense, the fight over the numbers count is almost irrelevant.

Update: David Adesnik has a superb first-hand report of the day’s events. Neither the protestors nor the counter-protestors come out looking very well.

But leaving aside such strange arguments, I think the prevalence of the chickenhawk argument does say something important the anti-war movment, namely that the only story it can tell itself about those who support the war is that they are very selfish or very naive. If this war is about blood for oil and profits for Halliburton, how could anyone support it if they aren’t selfish or naive?

In contrast, mainstream Democrats know that promoting democracy is a good objective and that pulling out of Iraq may be very dangerous, even if they are 100% sure that we have already lost the war thanks to Bush’s incompetence. But that kind of intellectual opposition to the war doesn’t get people out in the streets.

Cindy Sheehan overcame such reluctance to a certain degree by infusing liberal arguments against the war with emotional content. But with soldiers and their families still coming out for the mission much more often than against it, Democrats can’t get as outraged as they were a generation ago, when our government was forcing young men to fight and die in Vietnam. That is the invisible strength of an army of volunteers. 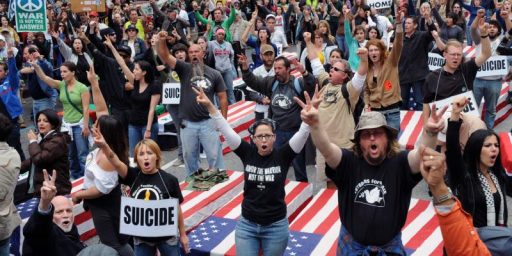