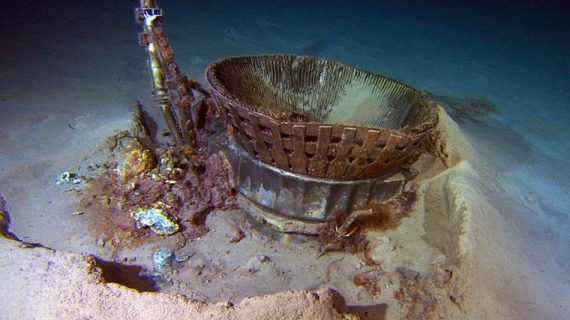 An expedition financed in large part by Amazon CEO Jeff Bezos has recovered the massive Saturn V engines that powered Apollo 11 out of Earth’s orbit and on toward the Moon:

What goes up must come down, and the five F-1 rocket engines that powered Apollo 11 into space are no exception. A few minutes after liftoff July 16, 1969, these engines fell into the Atlantic Ocean in a splashdown. NASA had no plans to recover them, but 42 years later, Amazon CEO Jeff Bezos and his exploration company, Jeff Bezos Expeditions, decided to do just that. A year later, Bezos announced that deep-sea sonar had located the Apollo 11 engines and that he planned to bring them to the surface.

A year after that, the Bezos Expeditions Apollo recovery project succeeded. On March 20, 2013, he stated on his website that the team had brought enough components back from the seafloor to create two full F-1 displays.

These engines, before they fulfilled their 165-second duty and crashed 67 miles (108 kilometers) back to Earth, boasted 1.5 million pounds of thrust and 32 million horsepower and in a single second burned 6,000 pounds of kerosene and liquid oxygen. They sent the first crew to the Moon and have been lying 2.6 miles (4.2km) underwater ever since.

After discovering the F-1s’ location, Bezos’ team spent three weeks at sea before recovering the engines. They sent Remotely Operated Vehicles (ROVs) more than 14,000 feet (4,267 meters) under the ocean. Controlling and powering them from that distance required miles of fiber-optic cable and more than 4,000 volts, or more than 300 times the voltage necessary to power a car.

The parallel challenges and technologies of the deep-sea exploration and space exploration were not lost on Bezos.

“The technology used for the recovery is in its own way as otherworldly as the Apollo technology itself,” he said. “We on the team were often struck by poetic echoes of the lunar missions… The blackness of the horizon. The gray and colorless ocean floor.”

Although Bezos and the team themselves did not venture miles underwater, as the ROVs explored and interacted with the F-1s’ watery home, they relayed video of their journey.

“We’ve seen an underwater wonderland,” said Bezos. “An incredible sculpture garden of twisted F-1 engines that tells the story of a fiery and violent end, one that serves testament to the Apollo program.”

The engines, even after Bezos’ planned restoration, are still NASA property. The organization will determine where their ultimate resting places will be. However, they are likely to offer one to the National Air and Space Museum in Washington, D.C. Bezos hopes the second will go to the Museum of Flight in Seattle, near which both Amazon and Blue Origins, his private spaceflight company, are headquartered.

Conceivably, the engines from every single Apollo mission ought to be recoverable, at least in part.