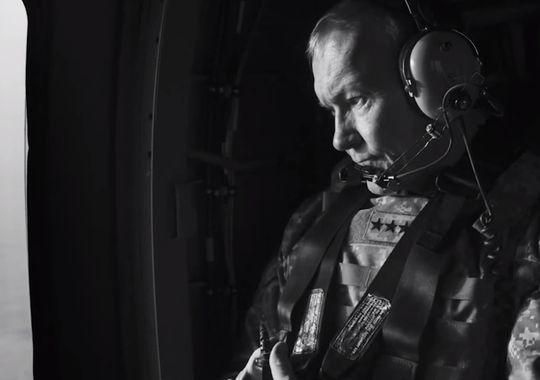 The service’s latest 60-second commercial debuted Monday, featuring black-and-white photos over stirring narration and music, offering glimpses of many aspects of service and sacrifice, and extolling the virtues of joining “the Army team.”

It ended without the “Army Strong” tagline — a phrase soldiers will continue to see in internal Army communications, but one that’s ended a nine-year run as the familiar face of Army branding after research showed civilians didn’t buy in.

“Our job is to market the Army [to the public],” Mark Davis, deputy assistant secretary of the Army for marketing and the director of the Army Marketing and Research Group, said in a Wednesday interview. ” ‘Army Strong’ just didn’t resonate with them. You’d either get an ‘eh’ sort of response, or you’d get an, ‘Of course you’re strong. You’re supposed to be. You’re in the Army. …’

“Everybody in the Army understands [‘Army Strong’] intuitively, because they’re a stronger human being for their experiences. People outside the Army didn’t get it.”

AMRG teamed with New York-based marketing firm McCann Worldgroup to create the spot, aiming to impress the civilian audience by presenting the Army as an elite team seeking new members because, as the narrator puts it, “there is important work to be done.” The message also played well internally, and with a group that may have been underserved by past Army marketing efforts.

“Veterans absolutely love it,” said Davis, a retired officer who left active duty in 2006 after a 25-year career that included a 2003 Iraq deployment and a Bronze Star Medal. “That’s a group of folks that have been a little disaffected from the Army, and we’re trying to bring them back into the fold.”

Keeping vets and active soldiers on board with the message holds greater importance in the age of social media, Davis said, as a disconnect likely would lead to those groups ripping any offending ad campaign to shreds on Reddit, Facebook or other social-media outlets, in full view of the target audience.

It’s somewhat amusing that people making sarcastic comments on social media was a major constraint but it’s a real concern in the current environment. There are millions of former soldiers out there, and we’ve got strong opinions about our service’s customs, traditions, and image. While I was sort of meh on “Army Strong,” I certainly ridiculed the previous “Army of One” campaign.  The non-replacement replacement looks pretty good:

One technique that’s gotten early online traction: Service members and veterans posing for black-and-white pictures, similar to the commercial, holding a sign with the words “I became a soldier” and the hashtags #ArmyTeam and #makingadifference.

Alongside those images, “we’ve been posting their stories,” said Crystal Deleon, AMRG’s social media manager. “Why they joined, what they did, what they think they did to make a difference while they were in.”

Some of those stories have been seen and shared by 200,000 people, Deleon said, “just because, I think, of that personal connection. … People read those and say, ‘That could be me.’ “

The other land component, the Marine Corps, has a much easier task in recruiting. It needs far fewer people and has a much stronger brand. You join the Marine Corps because you want to fight or because you want to be part of something elite. Because it’s much bigger and has a much more diverse mission, the Army has been all over the place in trying to sell itself over the years. While the Army has elite forces, it’s not an elite force—almost by definition. The pitch has thus been a combination of being part of something special (“Be all you can be!” and “We do more before 9 am than most people do all day!”) and about getting training and/or college money to be better prepared for life in the civilian world.

The campaign isn’t without its traditional elements: Expect to see the commercial during live sporting events, Davis said, as well as on 24,000 movie screens over the summer. The ad buy for the project, including some sponsored social-media placement, will be about $19 million, AMRG communications chief Ali Bettencourt said in an email.

And there is the matter of getting some screen time for generals: An image of Gen. Martin Dempsey, chairman of the Joint Chiefs of Staff, looking stoically out the window of a helicopter during a 2013 holiday tour of Afghanistan, appears at the 35-second mark — but not because of his prominent military post, Davis said.

Dempsey is an impressive man and a model general officer. But one wonders how much an old man staring stoically out of a helicopter will appeal to 18-year-olds trying to make a decision about what to do next with their lives.