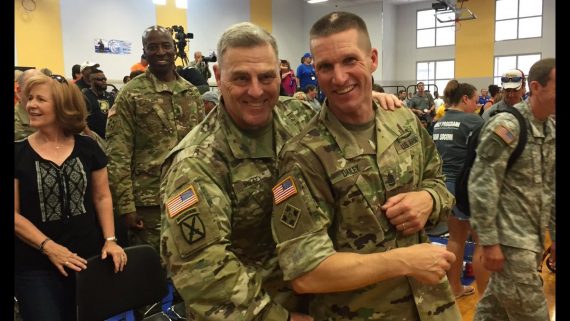 After more than a decade, the Army is back to allowing soldiers to roll the sleeves of their camouflage uniform in garrison:

The practice was banned for years. Then there was a pilot program. The results were studied closely. And on Tuesday, the Army is expected to announce its big decision: Rolled sleeves on camouflage uniforms are now completely acceptable.

The move would give a stiff-arm to recent history, in which the Army was the only Pentagon service that did not allow rolled sleeves, even in the hot summer months associated with serving at places such as Fort Hood, Tex., and Fort Benning, Ga.

Army Sgt. Major Daniel A. Dailey said in an interview Tuesday that he expected Gen. Mark A. Milley, the Army’s top officer, to sign off on the specifics within hours. There’s little doubt which way the service is going: A majority of soldiers have greeted the change with cheers, and service leaders appear to be receptive to that.

“When you can change thing that doesn’t break good order and discipline and that soldiers like, let’s do it,” Dailey said. “We’re the only service that doesn’t do it, and we used to. So it’s not one of those things that if we do, we can’t survive. Because we’ve done it before and we know it’s not going to hurt anybody.”

That perspective is new. Dailey said in an Army Times article published in February that there was no need to allow rolled sleeves, saying doing so was “not consistent with a neat appearance.” His predecessor, then-Sgt. Maj. Raymond F. Chandler, also said several times that he was against it.

Milley announced on June 16 a 10-day pilot program at Fort Hood and seemed open then to making the change permanent. Soldiers wore rolled sleeves with a previous camouflage uniform, the Battle Dress Uniform (BDU) until it was phased out in 2005, and there are numerous photographs from World War II and Vietnam that show soldiers with their sleeves rolled.

While a seemingly silly debate from a civilian perspective, it’s the sort of thing that matters to the troops.  In the Marine Corps, Jim Amos was reviled as Commandant for requiring sleeves down; he reversed course toward the end of his tenure.

The sub-debate on this is even more sillier for those outside the culture:

One question that remained Tuesday morning is whether sleeves will be rolled so that the camouflage shows on the roll. That, too, has generated a spirited debate, both because the Marines already roll their sleeves in and the Army has previously rolled their sleeves out.

Dailey said he kept his own opinions to himself during polling because he did not want to influence the results. But like the majority of the Army, he said, he favored rolling with camouflage out.

“I’m rooting for my camo out folks,” he said.

There’s no practical reason to care either way but Army tradition from the BDU era was camo out. It’s perhaps slightly harder to roll them that way but it’s pretty simple.