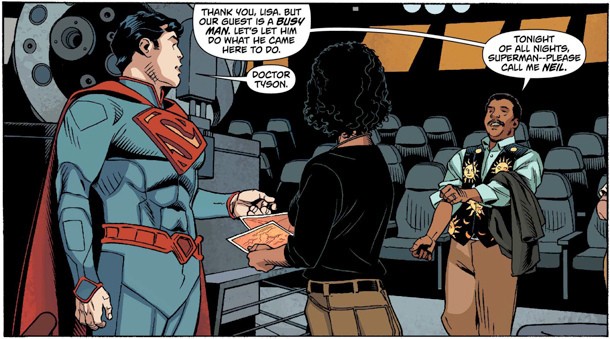 Neil deGrasse Tyson, director of the Hayden Planetarium in New York City and a hero to science geeks everywhere, has a role in a new Superman comic:

Look! Up in the sky! It’s a bird! It’s a plane! It’s Superman’s home star system! Thanks to astrophysicist and geek all-star Neil deGrasse Tyson, Krypton has been located within the known universe.

Tyson teamed with DC Comics to track down a Krypton-like system that matches hints from the comics. He found a fitting red dwarf in the constellation Corvus (the crow) in the southern sky, a mere 27.1 light years from Earth.

Tyson even gets a cameo in Action Comics #14, “Star Light, Star Bright,” when Superman makes a visit to the astrophysicist’s planetarium. The Man of Steel attempts to track down the location of his former home, which was destroyed shortly after he left, according to Superman mythology. The story’s timing should be just right for the light from the planet’s destruction to reach Earth.

“As a native of Metropolis, I was delighted to help Superman, who has done so much for my city over all these years. And it’s clear that if he weren’t a superhero he would have made quite an astrophysicist,” Tyson said in a release about the new comic.

Very cool. Although I’m not sure if this makes up for Tyson’s role in having Pluto delisted as a planet.