The situation in Bahrain continues to evolve as the state has pulled back the stick. 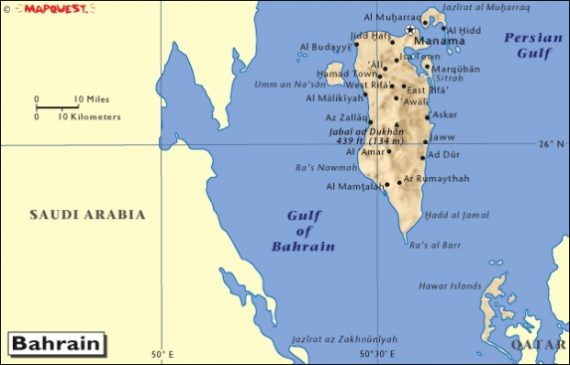 The army, which guarded the square after using deadly force to clear it on Thursday, was earlier ordered out.

In a statement made on Bahraini TV on Saturday Crown Prince Salman bin Hamad al-Khalifa said “calm is needed at this time… for all parties to be able to present their opinions”.

The crown prince – who controls the armed forces – ordered the army off the streets.

Via al Jareeza:  Protesters back in Bahrain centre

Sheikh Salman bin Hamad al-Khalifa, the crown prince, had earlier in the day ordered the military to withdraw, saying that the police would now be responsible for enforcing order, the Bahrain News Agency reported.

Soon after the crown prince’s directive, protesters attempted to stream back to the roundabout, but were beaten back by the police. According to the Reuters news agency, about 80 protesters were taken to a hospital after being hit by rubber bullets or teargas.

Reuters notes that the withdrawal of troops was an attempt to meet an opposition demand regarding talks.

NPR reports that both the military and the police have been withdrawn:

“We are victorious!” they chanted as they marched back into the square that has been the headquarters for their revolt against the Sunni monarchy in the predominantly Shiite island nation.

On Saturday morning, jubilant Bahrainis honked car horns, waved flags and flashed v-for-victory signs as the tanks moved away from the square. An Associated Press photographer saw a contingent of riot police who replaced the military forces fire tear gas at people celebrating the military withdrawal from the square and detain at least 10 people.

But the riot police then left their positions, got into vehicles and drove away to allow the thousands of cheering protesters to return to the square. The crown prince had said the police would maintain law and order on the streets after the military withdrawal.

It was not immediately clear if the tanks and other armored vehicles moved all the way back to military bases.

The situation clearly qualifies for a “developing” tag.

The story also references the Formula One issue that has come up a couple of times in the comments section of some of my other posts on this topic:

“He is afraid for his Formula One contract and thinks by just telling us to calm down we will listen,” Youssef said. “We want the entire royal family to step aside. We don’t want to dialogue. They will most definitely attack us again, but let them — we are ready for our blood to spill again.”