Monday, WaPo had an interesting (to me) piece entitled, “ Few Victories For N.Va.’s Legislators,” illustrating the difficulties faced governing a bifurcated state. Northern Virginia (NoVa), the wealthy DC suburbs and the high tech sector surrounding the Dulles airport, has been frustrated in its attempts to have its concerns addressed in the state legislature, which is dominated by the rest of what is otherwise a largely rural, Southern state. NoVa is much more affluent–and thus pays a disproportionate share of the tax burden compared to its population–yet it has astronomically higher housing costs and traffic congestion. But were I a resident of, say, Newport News, I wouldn’t be in favor of most of the measures NoVa legislatures are proposing for to accommodate the needs of this area.

Tonight, WaPo reports that the $1.6 Billion transportation plan, which is desperately needed here but seems a luxury in the rest of the state, has been taken out of the budget as part of a compromise to get it passed.

Virginia has been governing itself in more-or-less democratic fashion for going on 400 years now and, certainly, residents of Arlington and Richmond have more in common than those in Kurdistan versus the Sunni Triangle. Make of that what you will, but let’s just say that there will be some bumps on the road ahead. 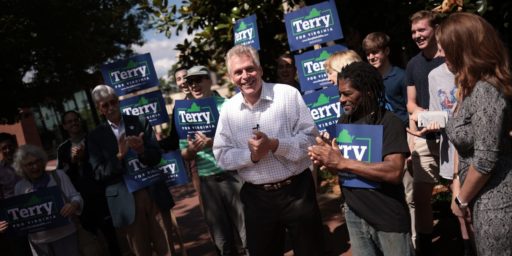