The world would undoubtedly be a better place if Islamic fundamentalism reached even 19th century Western notions of individualism and gender equality. But cultures evolve over decades, and bans on their practices are not useful means of promoting positive change within them. 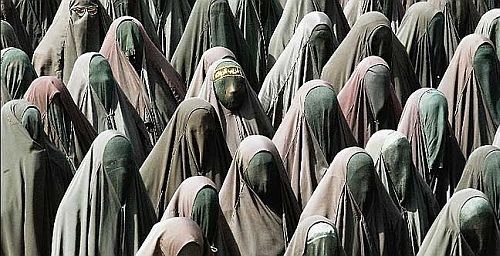 Burqas are repellent. They stand as a testament to why Islamic fundamentalism offends the sensibilities of enlightened people.

Nevertheless, I have watched the spreading impulse in Europe to ban them with considerable disquiet. Since I think the “spirit of religious freedom” is more than an aside, I find Mike McNally’s assertion that it’s “shameful” that Britain is, so far, eschewing this impulse unconvincing:

Across Europe, moves are underway to ban the burqa and similar Islamic face coverings. French and Belgian lawmakers have voted overwhelmingly for bills that, if enacted, will ban the wearing of full-face veils in public. Politicians in the Netherlands and Spain are considering bans on burqas in public buildings (a more widespread ban was narrowly rejected in Spain), while bans have been introduced by local authorities in several other countries.

A notable and shameful exception is Britain.

It’s certainly true, as he says, that many “Muslim women wear the burqa because they are forced to.” And there’s certainly a rational basis for prohibiting them in secured places — that’s no different from not allowing someone to wear sunglasses in one’s driver license picture. But a total ban on wearing them anywhere in public is misguided at best.

Likewise, France’s overreaction to the hijab. While the law was crafted in neutral language (it bans wearing all religious symbols in French schools), the fact that it was obviously a response to a growing trend of among Muslim girls could hardly have been lost on the relevant subculture. Even leaving aside the impact on everyone’s religious freedom, the debate could hardly have been better designed to marginalize Muslims. This is all the more unfortunate since the hijab was an example of, from our point of view, positive cultural evolution within the Muslim world.

The world would undoubtedly be a better place if Islamic fundamentalism reached even 19th century Western notions of individualism and gender equality. But cultures evolve over decades, and bans on their practices are not useful means of promoting positive change within them. Bans often as not tend to reinforce what they purport to inhibit. While we consider it a kind of “false consciousness,” this is a culture that exults in martyrdom. It will not quietly set aside a practice it sees as either holy or, in some cases, a symbol of social status.* Rather, Western Europe seems determined to turn thousands of Muslim women into self-proclaimed Islamic Rosa Parkses.

I have no “fear of being labeled Islamophobic” by anyone. But “Islamic misogyny” will not be undone by coercive secular dress codes. That’s tantamount to treating the symptom while ignoring the disease. Neutral enforcement of existing laws and mores is a far more effective means of inculcating Western values in subcultures which reject them. Such a strategy doesn’t just avoid the pitfalls of targeting a specific subgroup and the attendant unintended reinforcement of the practices one hopes to amend. It also just happens to be the one that’s genuinely consistent with the values we hope to spread.

—
* Hard though it may be for us to believe, for some Islamic women the putting on of the burqa really does represent liberation. The very ability to abide by the religious injunction to remain aloof from unrelated males by means of the burqa shows that they are above the social level of lower class women that cannot do so because it interferes with their work. In short, within its cultural context, it’s akin to Western women wearing heels to work rather than “practical” shoes. If one imagines how an American woman would react to having her Manolo Blahniks banned by Christian fundamentalists, one gets at least a sense of the difficulty of the task at hand.