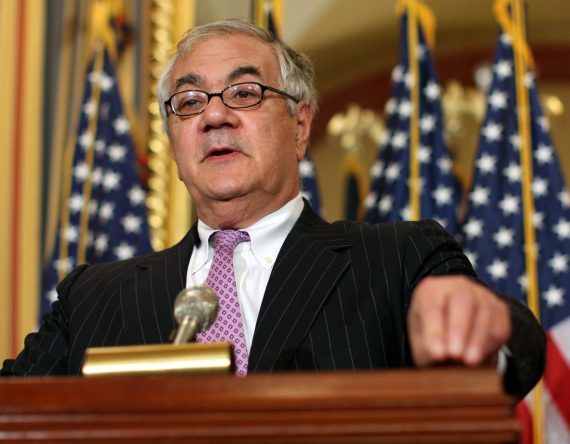 Barney Frank, who has represented Massachusetts’ 4th Congressional District since he was elected in 1980, will announce later today that he will not be seeking re-election in 2012:

US Representative Barney Frank, the state’s highest-profile congressman and one of the nation’s leading liberal voices after being among its first openly gay elected officials, planned to announce today that he will not reelection next year.

A top adviser told the Globe that the new district in which Frank would have had to run next year was a major factor in his decision. While it retained his Newton stronghold, it was revised to encompass more conservative towns like Walpole while losing New Bedford, a blue-collar city where the Democrat had invested a lot of time and become a leading figure in the region’s fisheries debate.

Frank’s campaign manager last year said his withering 2010 re-election effort spurred the congressman to think seriously about retirement, even saying a few days after the election that it would be his last one.

Frank wanted to announce that this would be his final term immediately afterward, but decided against it, said Kevin Sowyrda, the campaign manager.

“We looked him right in the face and said, ‘You can’t resign,” Sowyrda said. “In fairness to Barney, he was emotional about it. He said, ‘I know I’ve got to stay.'”

But retirement has been on his mind ever since.

The congressman scheduled a 1 p.m. press conference at Newton City Hall “to formally announce and answer questions about his decision not to run for re-election in 2012,” according to a statement.

Notwithstanding the districting changes cited in the article, I think it’s safe to say that Frank will likely be replaced by another Democrat. Frank has always been an outspoken Member of Congress on a wide variety of issue, and also a lightning rod for conservative criticism. In many cases, it was clear that the criticism has been based as much on Frank’s sexuality as on his policies or record, Rush Limbaugh’s stereotypically insulting parodies of Frank come to mind in that regard. Frank’s tenure was not without controversy, of course, including a scandal in the early years of his time in Congress involving a male prostitute name Steve Gobie as well as alleged ties between his current partner and Fannie Mae during the time that Frank was Chairman of the House Banking Committee. Frank moved beyond that, and the voters in his district seemed to as well, but conservatives never really have. In more recent years, Frank played a central role in the repeal of Don’t Ask, Don’t Tell and formed an unlikely alliance with Ron Paul on issues related to regulation and oversight of the Federal Reserve Board and Online Gambling.

We Will Control the Horizontal