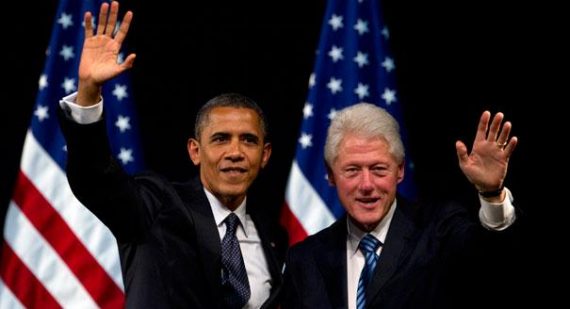 Bill Clinton told Sen. John McCain he agrees that President Barack Obama should act more forcefully to support anti-Assad rebels in Syria, saying the American public elects presidents and members of Congress “to see down the road” and “to win.”

At another point during a closed-press event Tuesday, Clinton implied that Obama or any president risks looking like “a total fool” if they listen too closely to opinion polls and act too cautiously. He used his own decisions on Kosovo and Bosnia as a point of reference.

“Some people say, ‘Okay, see what a big mess it is? Stay out!’ I think that’s a big mistake. I agree with you about this,” Clinton told McCain during an event for the McCain Institute for International Leadership in Manhattan Tuesday night. “Sometimes it’s just best to get caught trying, as long as you don’t overcommit — like, as long as you don’t make an improvident commitment.”

“Nobody is asking for American soldiers in Syria,” Clinton said. “The only question is now that the Russians, the Iranians and the Hezbollah are in there head over heels, 90 miles to nothing, should we try to do something to try to slow their gains and rebalance the power so that these rebel groups have a decent chance, if they’re supported by a majority of the people, to prevail?”

“My view is that we shouldn’t over-learn the lessons of the past,” Clinton said. “I don’t think Syria is necessarily Iraq or Afghanistan — no one has asked us to send any soldiers in there. I think it’s more like Afghanistan was in the ’80s when they were fighting the Soviet Union … when President Reagan was in office [and] got an enormous amount of influence and gratitude by helping to topple the Soviet-backed regime and then made the error of not hanging around in Afghanistan” to try to cash in on the gains.

If Clinton had ever blamed a lack of action because “there was a poll in the morning paper that said 80 percent of you were against it … you’d look like a total wuss,” he said. “And you would be. I don’t mean that a leader should go out of his way or her way to do the unpopular thing, I simply mean when people are telling you ‘no’ in these situations, very often what they’re doing is flashing a giant yellow light and saying, ‘For God’s sakes, be careful, tell us what you’re doing, think this through, be careful.”

Clinton continued, “But still they hire their president to look around the corner and down the street, and you just think – if you refuse to act and you cause a calamity, the one thing you cannot say when all the eggs have been broken, is that, ‘Oh my God, two years ago there was a poll that said 80 percent of you were against it.’ Right? You’d look like a total fool. So you really have to in the end trust the American people, tell them what you’re doing, and hope to God you can sell it” and that it turns out okay in the end.

Now, these are out-of-context quotes taken from a closed-to-press event and apparently in response to questions from the audience. So, perhaps Clinton was being purely hypothetical here. Otherwise, he’s either being grossly unfair to President Obama or he’s revealing inside information that reflects the judgment of his wife, former Obama Secretary of State Hillary Clinton.

While I certainly agree with President Clinton that presidents have to make foreign policy decisions without undue deference to public opinion–which is fleeting and uninformed–there’s no evidence that I’m aware of that Obama’s Syria policy is driven by the polls. The polls opposed intervention in Libya, too, and that didn’t seem to bother him.  Does Mrs. Clinton, who is certainly more privy to Obama’s foreign affairs decision-making process than I am, think otherwise? If so, having her husband plant this seed is Machiavellian, indeed.

Otherwise, I’m inclined to believe that this president is doing his best to serve America’s national interests and is tempering whatever ideological preferences he has to intervene in humanitarian disasters—which may be strong, indeed, given how close he’s been to Samantha Power going back to at least the 2008 campaign—with a hard-headed cost-benefit analysis. Absent strong evidence to the contrary, that’s how I presume any American president decides when to send our forces off to war.