The Boy Scouts is strongly reconsidering its ban on gays. 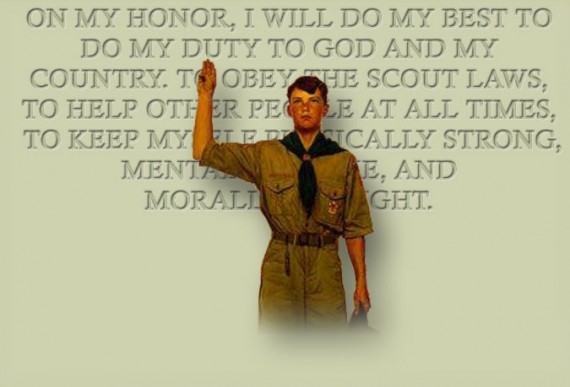 The Boy Scouts is strongly reconsidering its ban on gays.

As early as next week, the Boy Scouts of America may announce it will allow gay Scouts and troop leaders, a spokesman for the group has told USA TODAY.

If this policy shift is approved by the national board meeting next week, it will be a sharp reversal of the Scouts’ decades’ old national policy banning homosexuals.

“The policy change under discussion would allow the religious, civic or educational organizations that oversee and deliver Scouting to determine how to address this issue,” BSA spokesman Deron Smith said in a statement to USA TODAY.

Only seven months ago, the Boy Scouts affirmed its ban on gays after a nearly two-year examination of the issue by a committee of volunteers convened by national leaders of the Boy Scouts of America, known as the BSA. However, local chapters and some members of the national board — corporate CEO Randall Stephenson of AT&T and James Turley of Ernst & Young — called for a reconsideration.

The proposed new policy would leave decisions on membership and leadership up to the BSA’ s 290 local governing councils and 116,000 sponsoring religious and civic groups.

“Scouting has always been in an ongoing dialogue with the Scouting family to determine what is in the best interest of the organization and the young people we serve,” Smith told USA TODAY.

The Boy Scouts of America, one of the nation’s largest private youth organizations, is actively considering an end to its decades-long policy of banning gay scouts or scout leaders, according to scouting officials and outsiders familiar with internal discussions.

If adopted by the organization’s board of directors, it would represent a profound change on an issue that has been highly controversial — one that even went to the US Supreme Court. The new policy, now under discussion, would eliminate the ban from the national organization’s rules, leaving local sponsoring organizations free to decide for themselves whether to admit gay scouts.

“The chartered organizations that oversee and deliver scouting would accept membership and select leaders consistent with their organization’s mission, principles or religious beliefs,” according to Deron Smith, a spokesman for the Boy Scouts’ national organization.

Individual sponsors and parents “would be able to choose a local unit which best meets the needs of their families,” Smith said.

Boy Scouts of America is discussing ending a longstanding ban on gay members and whether to allow local organizations to decide their own policy, a spokesman said on Monday.

The organization has been under attack from gay rights groups and some parents for discriminating against gay members and gay leaders.

“The BSA is discussing potentially removing the national membership restriction regarding sexual orientation,” spokesman Deron Smith said in an email to Reuters.

“The policy change under discussion would allow the religious, civic or educational organizations that oversee and deliver Scouting to determine how to address this issue,” the spokesman said.

That BSA is kicking the decision down to the troop level, rather than simply ending the policy of discrimination outright, is a shame but hardly surprising. While Scouting is slightly behind national sentiment on this issue, the fact of the matter is that anti-gay sentiment—and especially the despicable notion that gays are somehow predators who can’t be trusted with young boys—is still alive and well in major pockets of the country. Allowing the policy to change where there’s less resistance to it, thus creating an example for the rest of the country, is the safest way forward.