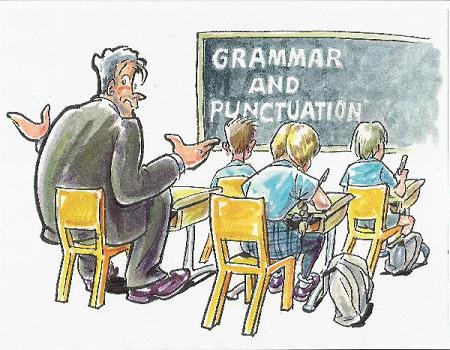 A recent piece at ScienceDaily titled “Grammar Errors? The Brain Detects Them Even When You Are Unaware” caught my eye, given how many grammar errors I deal with on a daily basis. It turns out that they mean something different than I do by the term.

Participants in the study — native-English speaking people, ages 18-30 — had their brain activity recorded using electroencephalography, from which researchers focused on a signal known as the Event-Related Potential (ERP). This non-invasive technique allows for the capture of changes in brain electrical activity during an event. In this case, events were short sentences presented visually one word at a time.

Subjects were given 280 experimental sentences, including some that were syntactically (grammatically) correct and others containing grammatical errors, such as “We drank Lisa’s brandy by the fire in the lobby,” or “We drank Lisa’s by brandy the fire in the lobby.” A 50 millisecond audio tone was also played at some point in each sentence. A tone appeared before or after a grammatical faux pas was presented. The auditory distraction also appeared in grammatically correct sentences.

This approach, said lead author Laura Batterink, a postdoctoral researcher, provided a signature of whether awareness was at work during processing of the errors. “Participants had to respond to the tone as quickly as they could, indicating if its pitch was low, medium or high,” she said. “The grammatical violations were fully visible to participants, but because they had to complete this extra task, they were often not consciously aware of the violations. They would read the sentence and have to indicate if it was correct or incorrect. If the tone was played immediately before the grammatical violation, they were more likely to say the sentence was correct even it wasn’t.”

When tones appeared after grammatical errors, subjects detected 89 percent of the errors. In cases where subjects correctly declared errors in sentences, the researchers found a P600 effect, an ERP response in which the error is recognized and corrected on the fly to make sense of the sentence.

So, essentially, native speakers automatically detect nonsense sentences—phrases that simply don’t comport with the structure of the language they’ve been steeped in all their lives.  This is a far different thing from picking up ordinary “grammatical errors” such as confusing there, they’re, and their or its for it’s. For that matter, it’s likely why even extremely competent writers violate made-up rules like “don’t split infinitives” or “don’t end sentences in prepositions”—doing those things sounds natural.

I’ve read that master chess players can catch a brief glimpse of a game board and reconstruct it exactly; they can’t, however, do this if the pieces are simply arranged randomly on the board.