The Department of Transportation said Monday that Republican Sen. Jim Bunning’s blockage of legislation designed to keep a host of federal programs operating forced the agency to furlough nearly 2,000 employees without pay, temporarily shut down highway reimbursements to states worth hundreds of millions of dollars and stalled multi-million dollar construction projects across the country.

“As American families are struggling in tough economic times, I am keenly disappointed that political games are putting a stop to important construction projects around the country,” Transportation Secretary Ray LaHood said in a statement. “This means that construction workers will be sent home from job sites because federal inspectors must be furloughed.”

Federal projects shut down by the furlough include more than $24 million in Idaho’s Nez Perce National Forest and $86 million for bridge replacements in the Washington, D.C., area.

Bunning, of Kentucky, told Democratic colleagues “tough s—” on Thursday when they tried to get him to change his mind about blocking the programs’ extension, according to several Senate insiders who spoke on condition of anonymity. Bunning wants the $10 billion price of extending the programs offset by reductions in spending elsewhere in the budget. His home state doesn’t have projects that will be affected by his action.

Federal agencies and lawmakers spent much of the weekend trying to assess the ripple effects of Bunning’s actions.

According to the National Employment Law Project, a liberal research group, some 1.2 million unemployed workers, including 14,000 in Kentucky, would lose federal jobless benefits this month if Congress doesn’t extend them. The U.S. Labor Department figures about one-third will lose benefits in the first two weeks of the month.

Letting the highway program lapse could mean an estimated 90,000 jobs lost. As many as 2 million families could lose access to television because a copyright law expired Sunday night.

Recall that the ostensible rationale for this move was fiscal responsibility.  Well, guess what?  All the contractors “furloughed” by this action will eventually be paid for the days missed once they resume work.  So, thanks to Bunning, we’ll be paying them good money to do nothing.  In the name of fiscal sanity.

It would be unkind to question the mental competence of a 78-year-old man, especially one who has displayed the good grace of not running for another term when his colleagues continue well into their 90s.   But let’s just say Bunning isn’t pitching a perfect game here. 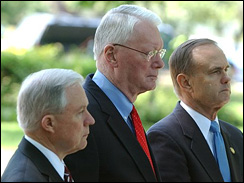