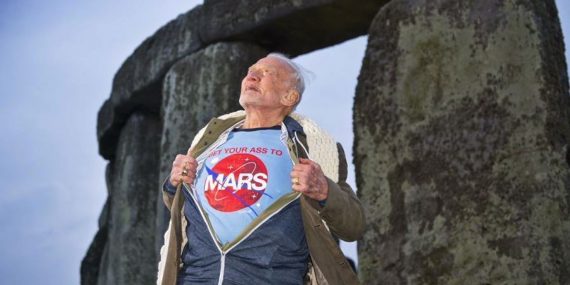 Yesterday, Buzz Aldrin was evacuated during what was supposed to be a week-long visit to the South Pole due to unspecified medical issues:

Former NASA astronaut Buzz Aldrin was evacuated from the South Pole on Thursday after falling ill during a visit with a tour group.

The 86-year-old Aldrin arrived at a hospital in Christchurch, New Zealand early Friday morning local time. According to a statement from the tour company, White Desert, he had fluid in his lungs but was responding well to antibiotics and was in stable condition.

Aldrin, who in 1969 became the second person to walk on the moon, arrived at the South Pole on Nov. 29, according to a message from his assistant, Christina Korp. He was scheduled to be there until Dec. 8 but his “condition deteriorated” shortly after arriving, according to the White Desert statement.

After a discussion between the White Desert doctor and the U.S. Antarctic Program, the National Science Foundation agreed to provide medical evacuation for Aldrin. He was flown to McMurdo station, a research facility run by the NSF, on ski-equipped LC-130 cargo planes flown by the 109th Airlift Wing of the New York Air National Guard. Hours later, he boarded a Safair cargo plane that transported him to Christchurch, where the logistics hub for the Antarctic program is located.

According to the statement from White Desert, Aldrin will stay overnight for observation at the New Zealand hospital. His manager described the evacuation as “grueling,” but said Aldrin is in good spirits.

Official statement about Buzz and his evacuation from the South Pole. He's recovering well in NZ. Full statement https://t.co/OacRI4577Z pic.twitter.com/QdrEaHuQHq

And his manager verified that he indeed did make it to the South Pole notwithstanding the medical evacuation:

As @TheRealBuzz is recovering I did want to let people know that he did make it to the South Pole which was his objective. Thnx for prayers! pic.twitter.com/jDWcq7PvU0

Our own James Joyner summed it up well:

Of course he is, he’s Buzz Effing Aldrin, the guy who’s not afraid to give a good punch to a guy half his age: