Mark Steyn, commenting on images of camo-wearing police in Ferguson:

So, when the police are dressed like combat troops, it’s not a fashion faux pas, it’s a fundamental misunderstanding of who they are. Forget the armored vehicles with the gun turrets, forget the faceless, helmeted, anonymous Robocops, and just listen to how these "policemen" talk. Look at the video as they’re arresting the New York Times and Huffington Post reporters. Watch the St Louis County deputy ordering everyone to leave, and then adding: "This is not up for discussion."

Really? You’re a constable. You may be carrying on like the military commander of an occupying army faced with a rabble of revolting natives, but in the end you’re a constable. And the fact that you and your colleagues in that McDonald’s are comfortable speaking to your fellow citizens like this is part of the problem.

A long term problem with law enforcement policy in the United States, and therefore in the attitudes of too many (although not all) in law enforcement, is that members of the public can be treated as the enemy.  This is never the attitude that the police should have, even though I fully understand that the police often have to deal with very serious crimes.  Without a doubt, the situation in Ferguson arose out of an overly adversarial attitude by police vis-à-vis Michael Brown.

While on the one hand one does not want to overstate this problem.  Policing is hard work, to be sure, and I have friends and family who truly serve/have served the public.  However, on the other hand at time like this I can’t help but recall an acquaintance of mine who was a part-time patrolman in a small Alabama town who really was looking forward to SWAT training (which struck me as rather unnecessary at the time, and as truly absurd as I think about it now. 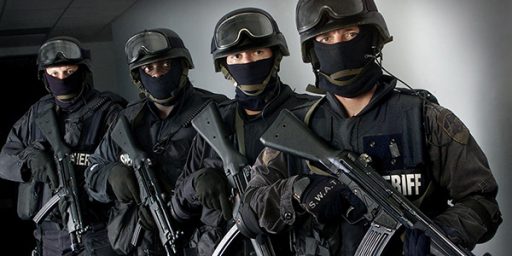 Police Are Not Soldiers; Our Communities Are Not War Zones