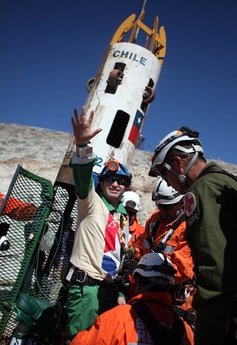 Second: Robert W. Armijo – Host of “Survivor”, Jeff Probst, greets the latest contestant to be voted out of the collapsed Chilean mine.

Third: FormerHostage – Unfortunately, the teams were unable to drill deeper and thus could not reach Obama’s approval numbers.

Michael Hamm – Unlike Obama’s stimulus package, this was one “Shovel Ready” project that succeeded.

Maggie Mama – Although it never left our atmosphere, it was “one huge leap for mankind”

grizzlybare – “They put me in the capsule upside-down! I’m gonna kick Pepe’s ass in 30mins…he’s coming up next…”

Stormy Dragon – The celebration lasted until one of the 33 miners got a hold of a newspaper, at which point they all demanded to be returned to the mineshaft.

“Hey… I got and idea for a place to put a Mosque.”

The Chile manned space program was met with great anticipation.

The Tuesday Contest has already started to coast.