The Enough With The Butt Cracks Already Edition OTB Caption ContestTM is now over. 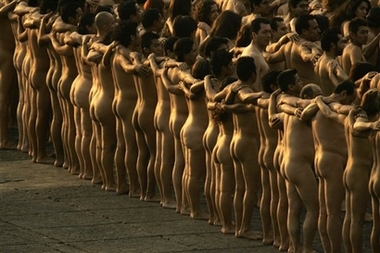 Third: charles austin – It is amazing what you can see on Google Earth if you zoom in far enough.

pudge – This scene from the upcoming documentary about Al Davis, seems to explain one of the flaws in the Raiders draft selection criteria.

yetanotherjohn – The lines to the prison shower were long as Paris Hilton spent her first day of incarceration.

Scott_T – ….and my father told me, “Be careful that you don’t drop the soap there.”

McGehee – “These things are always so awkward. I never know what to do with my hands.”

“So which one of you goes by the name El Chorizo Grande?”

The Grand Opening of Rodney Dill’s new line of StarButts coffee shops came off without a hitch.

“I just thought of something, can you remember to pick up some Cottage cheese on the way home?”

The trap was set, it was only a matter of time and that desperado, Kancho Villa, would be sure to make an appearance.

“Take just one sheet, and pass the roll down the line.”

Thursday Contest has already resorted to reading the directions.