The Under the Rainbow Edition OTB Caption ContestTM is now over. 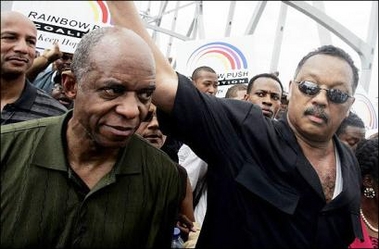 Gollum – Under the pretense of waving to a supporter, Jesse Jackson checks to see if the “Kick Me” sign he secretly taped to Jefferson’s butt is still there.

Elmo – America … where every person can rise to their own level of mediocrity.

Mr. Right – The legend is true! There’s a pot of gold at the end of that rainbow!

SgtFluffy – JJ: It was him Officer! Right over here!

Mr.Right – Ray “Sugar Daddy” Nagin (one of the “3 Musketeers”) accompanies his favorite chocolate treats: Jesse “PayDay” Jackson and William “$100,000 Bar” Jefferson, as well as numerous “Skittles” fans (taste the rainbow), on their way to a candy convention in the Chocolate City.

As I’d used up all my good Johnny Cochran captions at Mr. Rights contest it seemed only fitting to award him the bottom of the barrel. All I was left with was a bunch of euphemisms for cold and nothing to rhyme with.