Not too long ago, Trick Or Treating didn't mean getting candy produced by large corporations. 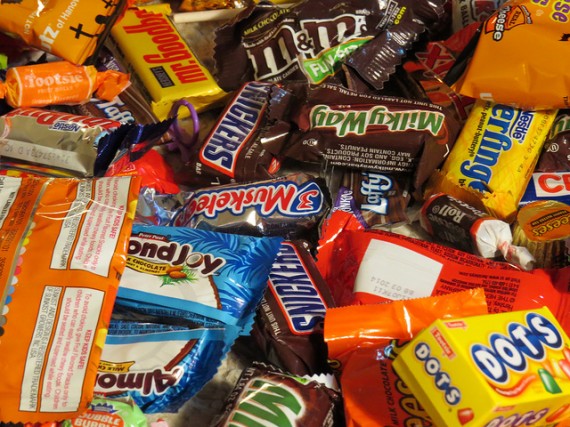 Later today, children all over the country and, accompanied for the most part by one or both parents go door-to-door gathering candy from neighbors. It’s a tradition that we’ve all participated in either as the recipient and the giver so much that it comes as second nature. As Virginia Postrel notes in an interview with retired Rutgers University literature professor Samira Kawash, the author of  Candy: A Century of Panic and Pleasure, there was a time when candy and Halloween had nothing to do with each other:

Question: When and how did candy become associated with Halloween? Was trick-or-treating just concocted to sell candy?

Answer: Would you believe the earliest trick-or-treaters didn’t even expect to get candy? Back in the 1930s, when kids first started chanting “trick or treat” at the doorbell, the treat could be just about anything: nuts, coins, a small toy, a cookie or popcorn ball. Sometimes candy too, maybe a few jelly beans or a licorice stick. But it wasn’t until well into the 1950s that Americans started buying treats instead of making them, and the easiest treat to buy was candy. The candy industry also advertised heavily, and by the 1960s was offering innovative packaging and sizes like mini-bars to make it even easier to give out candy at Halloween. But if you look at candy trade discussions about holiday marketing in the 1920s and 1930s, Halloween doesn’t even get a mention.

Given the fact that mass marketed candy didn’t really become a phenomenon until after World War Two, this isn’t entirely surprising. Yes, companies like Hershey’s and Mars were around back then but it was also a time when to the extent people bought candy instead of making it at home, they would typically by buying it from a local store where it was handmade, or from companies that were local to specific areas. Such candy as likely more expensive than what we are familiar with today, at least relatively speaking given what family income was like at the time, and thus it would have been unlikely that people would be buying it in mass amounts to give away to kids who come to the door. The other side of the coin, of course, is that this was an era when women were more likely to be at home rather than working, so homemade treats were more common and the convenience of the bag of candy from Wal-Mart wasn’t even an option. Then, of course, there’s the fact that the Great Depression made it harder for people to afford relative luxuries like candy and sweets to begin with, never mind buying such things just to give them away. So, the idea that the “treat” that came with “Trick Or Treat” in the 1930s would be something like a toy, or coins, isn’t all that unusual.

Even when I was Trick Or Treating as a child in the 1970s, it wasn’t uncommon to get something other than candy from one of the neighbors, especially it if was an older couple. Small amounts of change, like pennies and nickles were common, as were some homemade treats such as popcorn balls or, one year in particular, a neighbor who gave out Candy Apples. As a kid, of course, the expectation had set in by then that you’d get candy so it wasn’t always thrilling to get loose change or a toy or something like that, but it did happen. At some point, though, those types of treats started to disappear. To a large degree, of course, that was due to the candy companies using advertising to turn Halloween into being synonymous with the receipt of candy, but there were also other factors as well.

I can recall when I was still young enough to go out on October 31st that one first started to hear about alleged tampering with treats given out on Halloween. This would include razor blades in apples or pieces of homemade candy, poison, and other such things. By the time I was in my final years of Trick Or Treating, I can remember sitting at the kitchen table with my Mom as we went through everything I had gotten so she could “check” it. Postrel asked Kawash what her research had discovered about this phenomenon:

Q: You write about what you call “Halloween sadist legends.” Do these perennial tales of poisoned candy and razor blades in apples have any basis in truth? How are they connected to the non-Halloween history of candy?

A: Every Halloween, some earnest civic group reminds parents to be alert for “tampering” that might reveal some poison or drug or sharp thing lurking in the innocent candy loot. And how many instances of such tampering have been documented? Almost none. When there is actual harm, it almost always turns out to be traced to one of three causes: either a malevolent adult meant to hurt a child under cover of the anonymous Halloween sadist, or a child was accidentally poisoned and adults tried to cover it up by pointing fingers at a murky murderous stranger, or someone (usually a kid) wanted to get attention by planting evidence and then “discovering” a tainted treat. It’s gruesome to say it, but the myth of the Halloween sadist turns out to be quite useful if you are hoping to get away with murder.

What fascinated me as I researched the history of candy was discovering how often candy has been blamed when something bad happens, even before the Halloween scares of the 1970s. It turns out that “poison candy” is an idea as old as mass-produced candy, going back to the 1880s. And as with the “Halloween sadist,” poison candy was mostly myth. People found it easy to believe that candy was harmful, even when it wasn’t. It was a novel form of food, entirely artificial, entirely for pleasure. A lot of people looked at those bright colors and strange flavors and concluded that it couldn’t possibly be safe.

Truth or not, though, the stories about tainted treats likely contributed greatly to the end of homemade treats as Halloween Treats that would be handed out to children, and it’s somewhat understandable. It’s far easier to tell if a “Fun Size” Milky Way bar wrapped in its plastic wrapper has been tampered with than it would be for something that is homemade and, say, wrapped in Saran Wrap or some similar product. Additionally, as the nature of neighborhoods changed and it became less likely that parents would know the people that their children were receiving treats from — something that was largely true of the neighbors I would go to with friends on Halloween as a child — the less likely there would be a trust factor in accepting something unconventional for Halloween. There’s obviously some paranoia involved there, of course, since it’s entirely probable that someone you know could do something improper, but the trust factor of  familiarity that is a part of our daily interactions with people so it’s no surprise it would play a role when children are involved.

In any case, as your children bring their bags or pumpkins filled with commercially available treats home tonight, it’s worth remembering that there was a time not too long ago when it Halloween was quite different.