The May Remorse Be With You Edition OTB Caption ContestTM is now over. 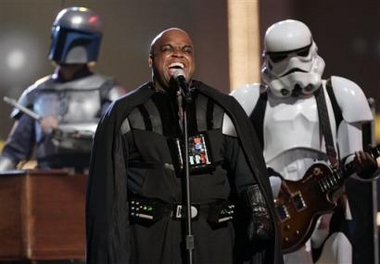 First: Michael Demmons – Yo, Luke? Who yo daddy is?

Second: McGehee – “Luke, there’s something more you need to know…”

Gollum – Say what you want, at least we’re not Lordi.

FormerHostage – May the Farce be with you.

FreakyBoy – Lando is seduced by the Dark Side’s All You Can Eat Buffet.

Roger – It was 20 years ago today
Vader taught the band to play
There’s one thing he wants Luke to know
I’m your daddy, yo
Please join the Dark Side today, today!
(With apologies to Lennon/McCartney)

Ancient Weapons and Hokey Religions are no match for a Billy Preston hit single. (Preston RIP 2006)

Darth puts the Soul in the Solar System.

After the Cantina Band broke up Darth went Solo.

Darth didn’t make American Idol, but that mind control trick worked just fine on Paula Abdul, if ya know what I mean.