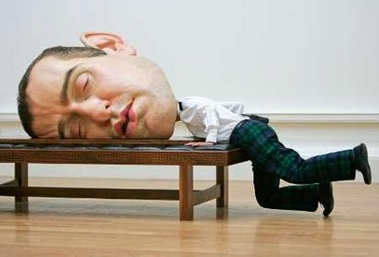 First: Kent G. Budge – From the fine print on the Viagra bottle: “Do not use as a suppository, as this can lead to unintended side effects.”

Second: yetanotherjohn – What do you mean there are ‘suspicions’ about steroid abuse?

MCGehee – Done in by too much heavy thinking.

Gollum – Aladdin eventually regretted using his third wish for “more head than anyone else in the world.”

charles austin – Kliban was right, never eat anything bigger than your head.

SgtFluffy – Eventually, Bobs ego got the best of him.

Bob could hardly have expected any different demise after being invited to go hunting with Dick Cheney.

On his first visit to the 3rd Rock From the Sun the Big Giant Head learned that gravity really sucked.”

“… but Pinky was never heard from or seen again.”

Riding Sun is flying off the handle.