The Walk a Mile for a Camel Edition OTB Caption ContestTM is now over. 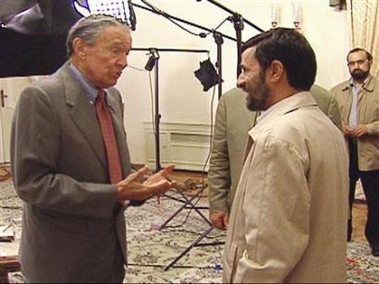 First: Greg Tinti – I didn’t realize you were that close with Mel Gibson…

Second: charles austin – Mike Wallace calms a jittery President Ahmadenijad by telling him that the ticking sound he hears is just the introduction to his news program.

Third: spacemonkey – “You had me at ‘Wipe Israel off the map'”

Matt – Greetings from the Great Satan

Maggie – You must know, I’ve never met a dictator I didn’t adore!

yetanotherjohn – Guy in the back: “I swear if that infidel doesn’t keep his hands to himself, I’ll kill him no matter what Ahmadinejad says about useful dupes.”

charles austin – “Oh no, no, no, no. I assure you that I have more contempt for America than you President Ahmadenijad.”

“No, no, Dan Rather is the one with the frequency”

I do not think “bend over and bleat” is a proper greeting.

Wallace: “So you want me to deliver two tubes of Camel Lube to your cousin Aful furees La’am, but it must be mixed before I land in the US, for ultimate freshness? No problem.”

Wallace: “I swear its true. The birthmark on my tuckus looks just like the prophet mohammad.”

Thursday contest is visiting with Hogzillah.