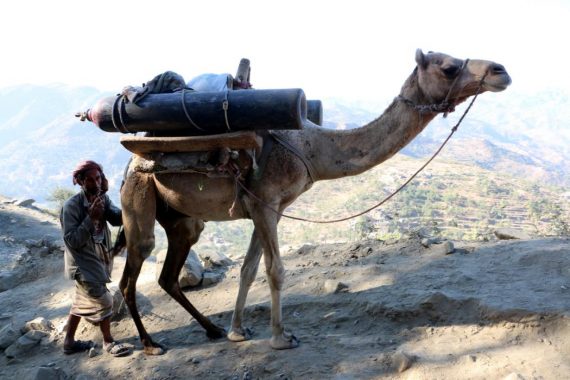 First: Jc – I once graced the cover of a cigarette box and now I am hauling oxygen…isn’t it ironic, don’t ya think?

Second: Mu – The Afghan Queen gets ready for the attack run.

Third: OzarkHillbilly – These new uparmored camels are much better than the old ones.

Franklin – Here are the remaining members of Afghanistan’s bicameral government.(Shouldn’t that be by-camel government – rodney)

John430 – The Taliban introduces their own ICBM (Improbable Camel-Based Missile).

al-Ameda – Bundys move their encampment from Oregon to Syria

RockThisTown – One hump or two in your IED?

Abdul: “You can kiss my dromedary air”

Steve Harvey inadvertantly introduced the camel as Miss Afghanistan…. no one complained.

Even with nuclear arms Iran’s delivery system left a little to be desired.

“So Muhammad, that camel only has one hump?”
“Yes, but my sheep, dogs, and donkey have been humped many times.”

Special Guest Appearance: Paul Hooson – Just wait until he unpacks the camel to set up his shade….that will be a tents situation!