The Murder and Mayhem Edition OTB Caption ContestTM is now over. 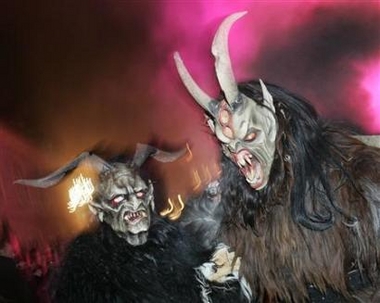 First: charles austin – “Slay bells ring, are you listenin’?
In the lane, blood is glistenin’.
A terrible sight, were scarin’ tonight,
Walking in a winter horrorland.” (After all its Christmas time)

Third(tie): radio free fred – DeVito And Clooney Have A Night On The Town.

Maggie – John Kerry and Nancy Pelosi are learning the hard way that the effects of botox are short-lived.

DaveD – All right, we’re finally back in the majority. I was getting tired of wearing those smiley faces for the last 12 years.

yetanotherjohn – A year ago the longhorn fans were cheering their team, now they are turning vicious.

Michael – After many delays, Microsoft Vista, previously codenamed “Longhorn” has been released. Microsoft promises that it will be the most user-friendly version ever.

In the old days, before the emergence of an activist judiciary, demons had to be employed to steal baby Jesus from nativity scenes.

Thursday contest is already running for 2008.

but Riding Sun is already doing some saber rattling.