The Fly Out Of The Sock Edition OTB Caption ContestTM is now over. 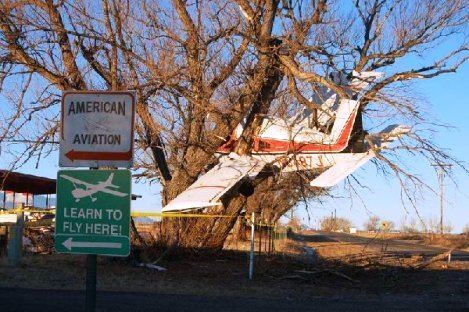 Many excellent captions for this contest, more than the ones honored below.

Steven L. – “As God is my witness I thought he (Teddy Kennedy) had enough wild turkey to fly” ?

charles austin – So the Garps still haven’t taken that plane down out of their treehouse?

elliot – “Are you sure you’re a pilot?” “No, but I stayed at a Holiday Inn last night”

yetanotherjohn – The FAA rejected the pilots explanation of a “Whomping willow” as the cause of the crash.

Gollum – Indignant, Jeff noted that he had successfully avoided the grain elevator, the water tower and the electric wires.

Russell Newquist – “As near as I can tell, they were trying to fly through that barn upside down.”

It was the success of Pelosi’s Air Academy that lead her to apply the same principles to a political career.