The Grasp of the Obvious Oblivious Edition OTB Caption ContestTM is now over. 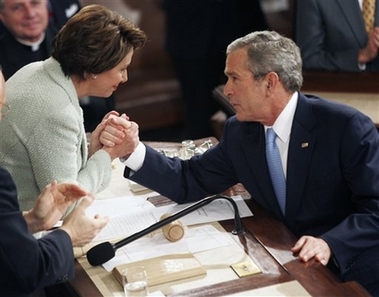 Second: FormerHostage – Pelosi: Sorry Mr. President, I’d fully extend my arm except I’ve had so many facelifts that if I did it would pull my @ss out of my collar.

elliot – Bush: Alright, how about two out of three?

David Harris – “I’ve got him where I want him. Now if I can just reach this gavel…”

Gollum – Bush (thinking): “She wouldn’t be smiling if she knew where this hand was ten minutes ago. Heh heh.”

Maniakes – Quick, grab the gavel while I’ve got her distracted!

Hodink – Bush – ‘I bet you could take Cheney in one try. Careful though. He’ll be packing.”

Lionel – “Whadya say we rassle for that big white house on the hill”?

Michael Demmons – The pinky tickling the palm was something Bill Clinton taught me, Mr. President.

Ticketplease – I think I can take her if she doesn’t spit in my eye again.

Dubya: “Ah Grasshopper, quickly as you can snatch the p… hey!”

“No Madame Speaker, I don’t think you should’ve referred to the gavel as Maxwell’s Silver Hammer during the SOTU address.”

“Earmarks I’d like to keep?… just the ones between my legs, if ya know what I mean.”