Nancy Pelosi is Speaker of The House again after eight years out of power, but there's little time for her to celebrate. 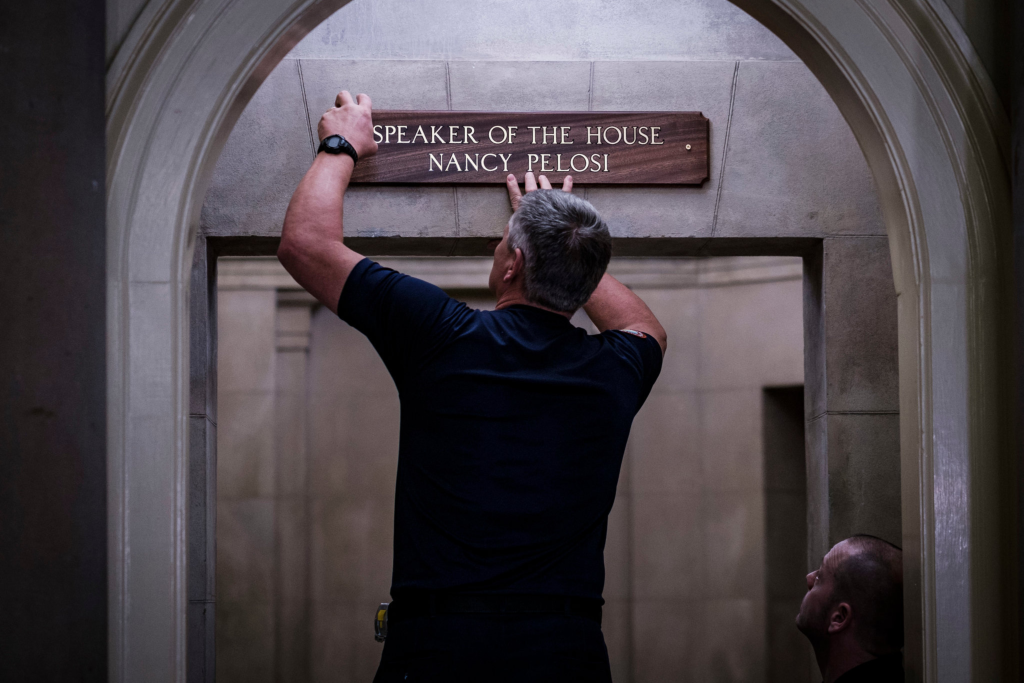 Not unexpectedly, Nancy Pelosi was rather easily elected Speaker of the House for the 116th Congress with only a minimal amount of dissent from a small number of Democratic members of the House:

WASHINGTON — On a day of pomp and pageantry, ebullient Democrats assumed control of the House on Thursday and elected Representative Nancy Pelosi of California to be speaker, returning her to a historic distinction as the first woman to hold the post at the pinnacle of power in Congress, second in line to the presidency.

The investiture of Ms. Pelosi, whose talent for legislative maneuvering is surpassed only by her skill at keeping her fractious party in line, placed her at the fulcrum of divided government opposite an increasingly combative President Trump. With Mr. Trump, his presidential campaign and his businesses all under federal and state investigations, her handling of him will likely define the 116th Congress.

Her election came on Day 13 of a government shutdown that has dramatized the shifting dynamics in Washington. Mr. Trump’s insistence on a wall on the Mexican border has come to embody harsh immigration policies that will run headlong into newly energized Democratic opposition.

But on Thursday, if only for a few hours, the dark clouds of divisive politics parted long enough for a peaceful transition of power from Republicans to Democrats, as a majority lawmakers rose in turn from their seats on the House floor to utter Ms. Pelosi’s name and formally award her the gavel she relinquished in 2011 after a Tea Party wave swept Republicans to power.

Following her election, Ms. Pelosi, wearing a hot pink dress, ascended to the marble dais in the center of the House chamber with Representative Kevin McCarthy of California, the incoming Republican leader, who handed her the wooden gavel.

“To the speaker of the House, Ms. Pelosi, I extend to you the gavel,” he said. The room erupted into applause as Ms. Pelosi held the tool aloft, showing it off to her colleagues.

“Our nation is at a historic moment,” she declared. “This Congress will be bipartisan, transparent and unified.”

Moments later, with a “Come on, kids!” Ms. Pelosi invited the children and grandchildren on the floor of the House to surround her as she took the oath of office.

“I now call the House to order on behalf of all of America’s children,” Ms. Pelosi said after she was sworn in.

Scores of newly elected Democrats in the most racially, ethnically and gender-diverse class in history were on hand for the occasion, some of them clad in the traditional or religious garb of their communities — a Palestinian thobe, a Muslim hijab or head scarf, a Pueblo dress. The new members provided the visual tableau of change in a chamber that has for centuries been overwhelmingly white and male.

“When our new members take the oath, our Congress will be refreshed, and our democracy will be strengthened by the optimism, idealism and patriotism of this transformative freshman class,” Ms. Pelosi said in prepared remarks to be delivered from the House floor. “Working together, we will redeem the promise of the American dream for every family, advancing progress for every community.”

Representative Hakeem Jeffries of New York, the chairman of the House Democratic Caucus, nominated Ms. Pelosi to be speaker, prompting a standing ovation from most of the Democratic side of the House and much of the spectators in the gallery.

Nancy Pelosi was elected speaker for the 116th Congress on Thursday, cementing her legacy and returning the longtime Democratic leader to the post she first held eight years ago.

Pelosi, the first and only woman to ever wield the speaker’s gavel, was elected with 220 votes. 15 Democrats did not vote for her on the floor.

Pelosi was celebrated in the leadup to the vote, which made her the most prominent Democratic foil to President Donald Trump at a time when the new House majority is eager to take on the president.

“Let me be clear. House Democrats are down with NDP,” House Democratic Caucus Chairman Hakeem Jeffries (D-N.Y.) said as he officially nominated Pelosi, whose maiden name is D’Alesandro, to the speakership. The Democratic side of the chamber erupted into a standing ovation.

The election marks a triumphant return to the gavel for the California Democrat after a band of a dozen-plus rebels unsuccessfully tried to deny her the speakership late last year. Pelosi is the first person in six decades to regain the speaker’s gavel after losing it, a job she first held from 2007-2011.

Pelosi, 78, also made history in a less positive way — ascending to the speakership in the middle of a partial government shutdown with no end in sight.

Still, even with the shadow of the shutdown looming over the new Congress, current and incoming lawmakers still exuded that “first day of school” vibe before the official proceedings kicked off shortly after noon.

Several lawmakers were seen toting their young children around the House as they welcomed new members and said hello to longtime colleagues. Pelosi entered the chamber with several of her grandchildren in tow, pumping her fists as she walked down the center aisle of the chamber.

Legendary crooner Tony Bennett, a guest of Pelosi’s, was spotted in the speaker’s box in the gallery above the chamber. Other guests of Pelosi’s included Washington Mayor Muriel Bowser, Mickey Hart of the Grateful Dead and Project Runway co-host Tim Gunn. Pelosi’s husband, five children and all nine grandchildren were also on hand for the occasion.

Senate Minority Leader Chuck Schumer (D-N.Y.), a former House member himself, was also on hand for the speaker’s vote and gave Pelosi a hug as the vote kicked off.

Several new members were still trying to find their way around the Capitol complex and introduce themselves to the police officers who station every entrance.

Rep.-elect Haley Stevens (D-Mich.), one of 100 incoming freshmen, was stopped by security as she tried to get to the House to be sworn in. She didn’t yet have a member pin, only a pass. The officer, who did not recognize her, looked at her name on the badge and muttered “bear with me here.”

It did not put a dent in her excitement to become a member of Congress. “We are energized and we are resolved and we are ready to deliver,” Stevens said enthusiastically as she turned toward the chamber.

Prior to today and during the campaign, there was some question about potential challenges to Pelosi’s leadership, especially from the progressie wing of the party and from Democrats elected in marginal In the end, 15 Democrats ended up either voting for someone else, including everyone from Congressman Joseph Kennedy to former Vice-President Biden or voting “No” or “Present,” presumably as a form of protest. In any case, with her election, Pelosi becomes the eighth Speaker of the House to be re-elected to the Speakership after having previously lost it. The previous seven were Frederick Muhlenberg, who served as Speaker in both the 1st and 3rd Congresses in the early years of the Republic, Henry Clay, who served as Speaker during the 12th, 13th, 14th, 15th, 16th, and 18th Congresses, Thomas Brackett Reed, who served as Speaker during the 51st, 54th, and 55th Congresses, Joseph Martin, who served during the 80th and 83rd Congresses, and Sam Rayburn, who served during the 76th, 77th, 78th, 79th, 81st, 82nd, 84th, 85th, 86th, and 87th Congresses. She also remains the only Member of Congress and the only woman to serve in the position.

Thanks to the ongoing government shutdown, Pelosi won’t get much of a honeymoon notwithstanding the laurels that were heaped upon her this afternoon. Later today, the House will vote on a series of bills designed to end the shutdown with respect to all of the agencies of government impacted by the shutdown with the exception of the Department of Homeland Security and to pass a continuing resolution with regard to DHS funding that allows the parties to continue negotiating with regard to President Trump’s border wall. Unfortunately, President Trump has already rejected that proposal and, because of that Senate Majority Leader Mitch McConnell has said that he will not put a bill before the Senate unless he’s assured that the President will agree to the deal. The major problem with that is that this is extremely difficult given the fact that the President has failed to say exactly what he’d accept other than the $5 billion for his wall that he continues to insist upon despite the fact that it’s clear that this is not going to pass Congress. This means that the parties will need to come up with some kind of face-saving proposal that both sides can accept. What that might be is something that, in the end, only the President can speak to at this point. However, as Senate Minority Leader noted just about a year ago, negotiating with President Trump is like negotiating with Jello because you can never be sure where he actually stand and you can never rely on his word at any given moment since he could end up changing his mind at the drop of a hate. Given this, it’s hard to see an easy resolution to this mess any time soon.

So, congratulations Speaker Pelosi, you’ve got your work cut out for you.