The Nice Pants Edition OTB Caption ContestTM is now over. 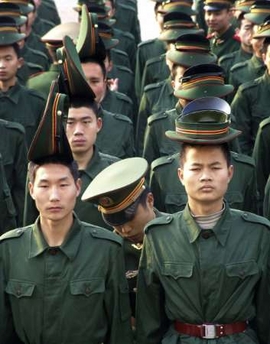 First: Gollum – And yet, somehow, they still manage to look more dignified than the French Army.

Second: McGehee – Lt. Cho knew he shouldn’t have let the troops see the movie Stripes the night before the big inspection.

Third: Maggie – The Chinese Drill instructor seems oblivious to one small oversight after ordering his platoon to “Align the Squad.”

charles austin – This illustrates the dangers of standing out in the Sun Tzu long.

McGehee – The launch of Red China’s new hockey team was delayed while organizers work out the correct meaning of “hat trick.”

elliot – Soldier, why are you wearing red ruby slippers? Hey wait they’re MINE!!!

Scott_T – Another annoying trick taught by the sergeants in the North Korean army to earn an extra food ration.

“Jees, one clown gets 15 minutes of fame and now everyone thinks they’re William Hung.”

“I just know Rodney Dill put you guys up to something.”

“Ok, so Wang’s been getting a little creative with the SuperGlue again.”

Wong never could determine why the whole regiment responded ‘Shi’ during the roll call, when he called out Harry Dong’s name.