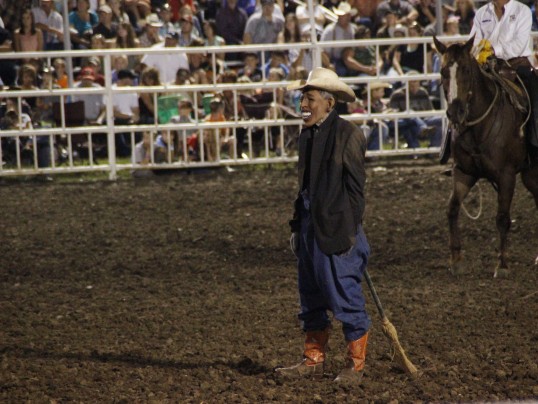 The current cause célèbre in many Right Wing circles is that of a rodeo clown who has been banned-for-life from performing at the Missouri State Fair after he oversaw the production of a skit in which another clown donned a Obama mask (and broom) and was chased by a bull. Here’s a description of the performance from CNN:

A rodeo stunt at the Missouri State Fair has come under criticism after a clown donned a Barack Obama mask and stuck on a broom that descended from his backside.

The stunt took place during the bull riding competition on Saturday night.

Another voice is heard over the loudspeaker working up the crowd and saying, “We’re going to stomp Obama now.”

“Hey, I know I’m a clown,” the second voice said. “He’s just running around acting like one. Doesn’t know he is one.”

According to other accounts reported via the AP, the crowd was asked if they wanted to see “Obama run down by a bull.”

Since video of the event hit the internet, various Missouri politicians from across the political aisle have spoken out against it, the Rodeo announcer has resigned his position, and as mentioned above, the clown who created the skit has been banned from performing at future state fairs.

Some have pointed out that this type of “dummy” skit is a rodeo “tradition.” Most make this argument by linking to a 1994 profile of a rodeo star which describes the following scene:

The big white gate flew open. The bull came out bucking. The rider flopped from side to side and the bullfighters held back, letting the bull make his moves until the rider dropped off. Licciardello crouched in a heavily padded barrel, a human target should the bull decide to charge. Hawkins waited near the barrel, holding his big inner tube. A dummy with a George Bush mask stood beside the clown, propped up by a broomstick.

T.J. Hawkins rolled out the big inner tube, and the bull lowered his head, shot forward and launched into the tube, sending it bounding down the center of the arena. The crowd cheered. Then the bull saw the George Bush dummy.

He tore into it, sending the rubber mask flying halfway across the sand as he turned toward the fence, sending cowboys scrambling up the fence rails, hooking one with his horn and tossing him off the fence.

But it had been a hot day, and bulls, like men, have moods. Jalapeno, Grant Harris’ “excited rascal,” called it a night, found the exit gate and, like a locomotive floating on cotton balls, galloped silently over the soft sand and disappeared into the night.

What these critics fail to note is that this event took place at the Cowtown Rodeo in New Jersey — a private rodeo. I, and others, have been looking for evidence of a similar thing happening at another State sponsored event like the Missouri State Fair. Nothing has surfaced at last check.

The State Fair is a public institution  and that shifts the discussion.

The very fact that the clown was making fun of the President makes it political satire — emphasis on the political part. We can argue whether or not it was good satire (I actually think the broom part was pretty funny), but we cannot argue that it wasn’t political. In a recently published interview, the rodeo clown (who was not the one in the Obama mask) has explicitly said the skit was to make fun of a current political figure.

And so the real question is whether or not a State, through its State Fair, should be sponsoring political commentary. Frankly, I think that’s a really bad idea. And I would feel the same way if this had been the State Fair booking Bill Maher for a performance (a quick Google check suggests that this hasn’t ever happened).

[Update 8.13 3:35PM] – In the comments below, regular commenter Stormy Dragon offers a solid counter argument to this point. He notes that Garrison Keillor’s A Prarie Home Companion, which often features political satire, often broadcasts live from State Fairs. Personally, my general feeling on Garrison Keillor is close to that of the Simpsons, but Stormy raises a reminder that political commentary can be found at the State Fair in many different guises.

Others have attempted to say that this is a violation of free speech rights. This is a problematic understanding of the First Amendment. The clown was allowed to complete the skit. The “speech” happened. He’s not being thrown in jail or forced to pay a direct fine. What the First Amendment does not protect one from is the ramifications of one’s words — in particular firings or rather not hiring in the future. And why? Because his performance (a) embarrassed his employer and (b) ultimately caused damage to their reputation. It may not be seen as “fair”, but the last time I checked the First Amendment had nothing to do with “fairness.” (As an aside, there’s also a certain irony that the issue of this ban is coming at a time when Missouri Republicans are working hard to get the state to pass right-to-work laws).

Ultimately, the thing that must be remembered is that while individuals have a right to engage in political satire, they don’t have a right to have it published. And once you look at the venue in which the speech was performed, one needs to ask do you want State Fairs to become a location where political commentary is regularly taking place?

[Update 8.15 @ 3:30pm] Since a commenter called me out on this point, I just want to say for the record that recent calls by the Missouri Chapter of the NAACP to investigate the Rodeo are without a doubt over the top and unwarranted. The “tradition” argument, including the 1994 account, actually helps demonstrate the weakness of the Chapter’s Accusations.

Second, this seems like a good place to link to an OTB “classic” article about Right Wing outrage over the “disrespectful” use of G.W.’s head in Game of Thrones.