Today’s Outrage Of The Day: “Decapitated” George W. Bush In `Game Of Thrones’

A year old, seconds-long, scene from a show on HBO has apparently become the latest cause for outrage. 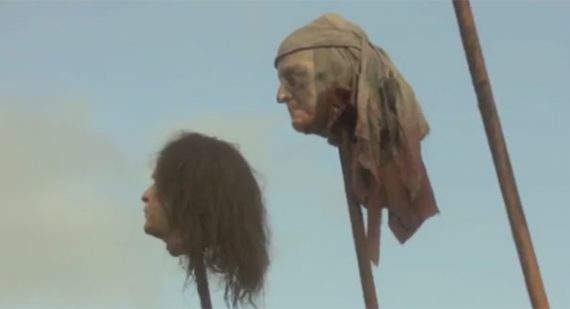 The blogosphere is abuzz today with the news that a scene from the Season One finale of HBO’s Game Of Thrones included a scene that briefly depicted a prop designed to resemble the decapitated head of George W. Bush:

In the “Game of Thrones,” you win or you die, and George W. Bush did the latter in the HBO series — by decapitation.

That is, a prop head of the former president appears in the TV show, according to series creators David Benioff and D.B. Weiss in the DVD commentary for season one, the website io9 reports. In a scene in the finale — where the character of Sansa Stark is forced to look at the severed head of her father, Ned Stark — Bush’s head is seen decorating a spike.

The creators insist “it’s not a political statement.”

“The last head on the left is George Bush. George Bush’s head appears in a couple of beheading scenes. It’s not a choice, it’s not a political statement, it’s just we had to use what heads we had around,” Benioff and Weiss say in the DVD commentary.

You can watch the scene in question here:

There are actually two things that are odd about this. First of all, the episode in question, Fire And Blood, aired on June 19, 2011, nearly a year ago, and the DVD for Season One was released three months ago. Given this, one wonders why it happened to be now that this story came out. Second, why didn’t anyone notice this before? The scene is brief, but given the penchant that many have for analyzing these shows scene by scene, one would have thought someone would’ve seen it already.

Once the story came out, the producers came out with the obligatory denial:

HBO responded to CBSNewYork.com’s request for comment on Wednesday night, offering the following statement from Benioff and Weiss:

“What happened was this: we use a lot of prosthetic body parts on the show: heads, arms, etc. We can’t afford to have these all made from scratch, especially in scenes where we need a lot of them, so we rent them in bulk. After the scene was already shot, someone pointed out that one of the heads looked like George W. Bush. In the DVD commentary, we mentioned this, though we should not have. We meant no disrespect to the former President and apologize if anything we said or did suggested otherwise.”

Apparently the outrage over this was so immediate, or at least immediate to the extent people started yelling about it when io9 posted the story last night, though, that HBO has now issued an apology. But, really, what’s the point? If nobody noticed this until someone pointed it out, then what’s the point of demanding the apology other than the demonstrate yet again how thin-skinned American politics has become? Yea, there’s something kind of creepy about it, but this is Game of Thrones, a show where gratutious sex and violence are an inherent part of the show. Of all the things they do, this is what you’re going to complain about?

FILED UNDER: Entertainment, Popular Culture, US Politics, Outrage of the Day