The Spam King and I Edition OTB Caption ContestTM is now over. 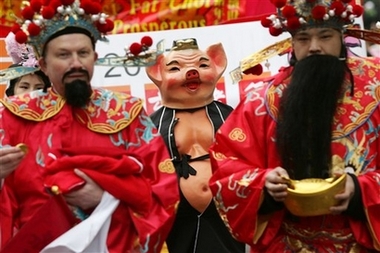 First: DaveD – The 2008 federal budget is sent to the White House for the President’s signature

Second: McGehee – “But Sen. Clinton, your husband was happy to accept campaign contributions from us!”

Third: FormerHostage – Brittany Spears suffers a wardrobe malfunction at the opening of her “Hey! Look at me! Look at me!” tour.

Dazd – Can you guess which of the three is Rosie O’Donnell?

MikeM – John Murtha is the center of attention at Chinatown festivities.

elliot – The new Spokesperson for TrimSpa is unveiled at a downtown celebration in LA.

Ingress – The beard growing contest was won by Miss Piggy! (Everyone has been reticent to ask why she won.)

Recurring dreams of past Seinfeld episodes still cause Michael Richards more loss of sleep than controversy over his racial epithats.

In the end, The Shrine of Anna Nicole Smith became the fifth most holy Islamic site.

Thursday Contest is already headed for the gutter.