The Going Off Half-Cocked Edition OTB Caption ContestTM is now over.

Again many amazing captions. The top four were really close. I will be off ’til Monday, so no Caption Jam this weekend, remember to visit the other regular contests. 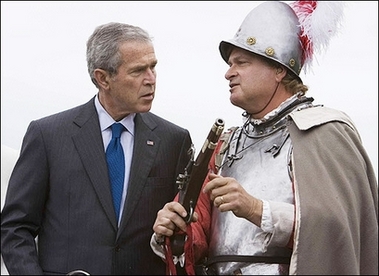 First: Maniakes – “The worst part of this job is little kids sneaking up behind you with refrigerator magnets.”

Second: fustian – Bob Hope! I thought you were dead?

Third(tie): mannning – So you rushed in and slaughtered some of them, captured their leader, I get that, but what did you do next?

Patrick T McGuire – Listen, like Rummy said, you go to war with what you have! Got it?

Anderson – “We’re an empire now, and when you’re an empire, you have to wear fancy armor.”

William d’Inger – Well, I expected better security than this at a G-8 summit.

elliot – Sooo, you want me to conquer Mexico again?

charles austin – “So what’s up with the outfit Karl?”

Alan Kellogg – No Mr. President, bleach will not get the gray out.

Anjin-San – “I’m the commander guy, not you! Now give me the friggin’ helmet!”.

“So how’d that Mexican problem work out with you Cortes?”

“How ya keep a straight face when ya say Lake Titicaca.”

“Catch-a-cold-Al? (Quetzalcoatl?) …and I thought nucular was bad.”

“Actually I used to be a Nuclear Physicist at Los Alamos, but an immigrant laborer is doing my old job there cheaper now.”

“Uh, I was hoping you’d sing a little Procol Harum for us.”

“You’re right sir. I don’t sound at all like James Earl Jones.”