The That’s Some Bad Hat Herod Edition OTB Caption ContestTM is now over. 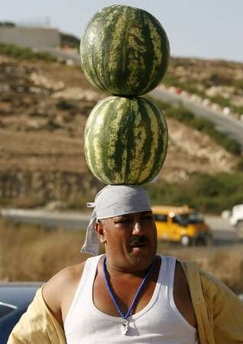 First: charles austin – Gallagher has gone too far this time.

Second: Bithead – “Subarctic temperatures will force us underground for a billion years.” — “So you got two melons?”

Caliban Darklock – I pity the foo’ who thinks I just fell off the watermelon truck… what?

elliot – Has anybody seen my watermelons?

Anderson – Hans Blix searching for the Watermelons of Mass Destruction … to no avail.

Though highly motivated by the $25,000 cash prize, Akmed didn’t really understand exactly what a Dolly Parton impersonator should look like.

“Yes, I’m with the committee to elect Dennis Kucinich, why do you ask?”

Mohammad had always been fond of the Fruit of the Loom guys.

Monday Contest is already fitting a square peg in a round hole.