The VooDoo That You Do Edition OTB Caption ContestTM is now over. 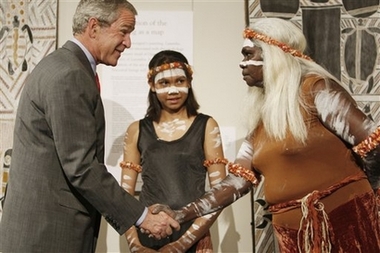 First: Not on your life – You know, I was a member of Skull and Bones,too!

Third: Cowboy Blob – At last, someone who understands Voodoo Economics!

elliot – What did that protester mean, ‘let’s throw another shrimp on the barbie’, after pointing to me?

earlybird – (Channeling John Belushi) “So, how much for the little girl, eh?”

Anderson – Bush’s search for Coalition allies leads him to sign a treaty with a remote Amazon tribe, which agrees to provide 80 women with spears in exchange for all the Sunnis they can eat.

dennis – Wow, I didn’t know Pocahontas was still alive…Glad to meet you ma’am

Kent – “Don’t we know each other in the Dream Time?”

“Oh, you say you do VooDoo… I thought ya said doo-doo.”

“… and remember, lots of pins in the Hillary one.”

“So just when did you do Bill?”