The French Bird of Prey Edition OTB Caption ContestTM is now over.

A tough contest to judge, but not as tough as non-tortured chicken 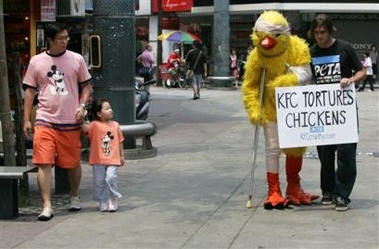 Second: Hermoine – “Know how I always said Big Bird was my favorite, Daddy? I like Elmo more now.”

Third: T. Harris – With many thousands of Americans dead and tens of thousands facing total devastation due to Hurricane Katrina, PETA bravely decides to focus on one of the more important issues facing this nation.

Laurence Simon – “Sorry, but we already contribute to the Prevent Mouse Rape Society.”

Chrees – “The conditions at chicken farms are just as bad as Mouse-schwitz!”

Matthew J. Stinson – “With her 15 minutes in the news cycle used up in the wake of Hurricane Katrina and the death of Chief Justice Rehnquist, Cindy Sheehan looks for a new day job.”

Rachel Edith – “Dad, does it change the taste of the chicken if you torture it first?”

The Not Going to Win a Trip to Disney World Award:

Stephen W. Stanton – “Disney tourists did not seem to appreciate the street artist playing with his limp c**k.”

“OK, no chickens, but how ’bout some scrambled eggs?”

“Is he an original or extra krispy kind?”

“I broke my leg while dancing to the French National Anthem.”