The The Nairobi Trio — Redux Edition OTB Caption ContestTM is now over.

First: Anderson – “No, seriously, Mr. President, the Lord said that you should nominate Harriet Miers to replace O’Connor.”

Second: Laurence Simon – “Actually, the hardest part about my job is keeping the reds and the whites separate in the wash.”

Third: T. Harris – “Hey, man, can you get me and my boyz some of those pointy hats?”

Maniakes – I greatly appreciate your offer, but I can’t see myself serving as an associate justice under the bozo on my left. You’ll just have to appoint your lawyer or something

DL – …So Clinton asks me, “Is saying I didn’t know that woman Miss Lewinsky” a sin or not?

Mark – President Bush looks on as John Roberts unveils the robe he intends to wear during his tenure as Chief Justice.

The heads of the NEW three branches of US Government, Bushie style.

“… and I think your administration should now focus on the Nucular family. Dang it! Now you got me saying it!”

“Yes you do really need to join the priesthood to get to wear a Bishop’s Miter.”

“You wish I’d put in a good word for your next nomination to get a free pass from the Democrats? Well you can wish in one hand and crap in the other and see which fills up first.”

“Yes, there is a mention of PMS in the Bible. Mary road Joseph’s ass all the way to Egypt.”

“Actually I’m dressed to see the Badger’s whup some ass.” 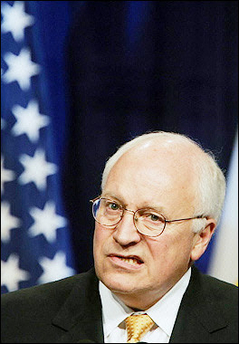 Thursday contest has already been started.