With Justice Kennedy retiring, the new center of the Roberts Court is likely to be the Chief Justice himself. 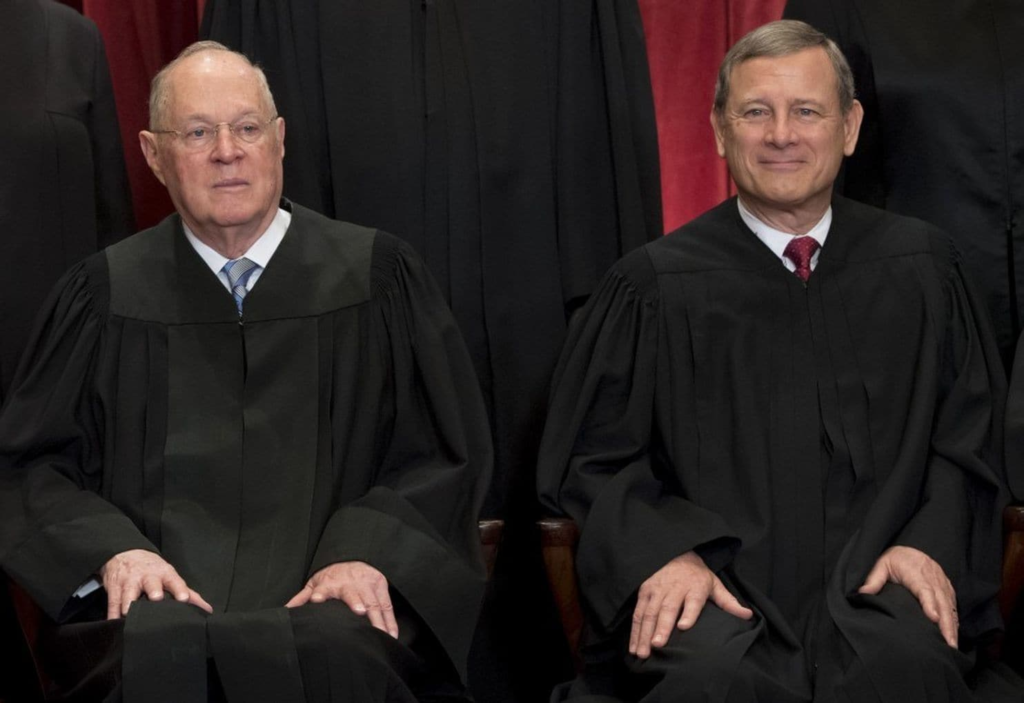 It’s only been a few days since Justice Anthony Kennedy announced his impending retirement from the Supreme Court, and we still have a week or so before President Trump names his selection to succeed him. Given the fact that Kennedy was the person who, more than any other, has served as a swing vote in the Supreme Court in several important areas such as Affirmative Action, abortion rights, LGBT rights, and other areas, there has already been much written about what this means for the future direction of the Court. Among the more important questions in that regard is where the “new center” of the Court will end up given the fact that it’s likely that we’re still going to see a lot of 5-4 decisions on high-profile cases unless and until one of the liberal Justices retires under Trump’s watch. One of the most likely candidates for that position, it turns out, is none other than Chief Justice John Roberts:

For the past dozen years, Justice Kennedy has sat in the ideological middle of the polarized court, with four liberal justices to his left and four conservative ones to his right, according to scores based on their voting patterns. His retirement will almost certainly mean that position goes to Justice Roberts, potentially encouraging him to be more moderate.

The chief justice, a conservative nominated by Republican president George W. Bush, has drifted slightly to the left in recent years, drawing howls of protest from activists on the right who have complained that he has proved to be a disappointment. But other than two votes upholding the Affordable Care Act, Chief Justice Roberts, 63, has reliably sided with the court’s other conservatives.

With Justice Kennedy’s departure and the likelihood that President Trump will succeed in winning confirmation of a conservative successor, the question is whether Chief Justice Roberts — an incrementalist who is passionate about preserving the institutional integrity of the court — will inch further toward the center.

“If Roberts stays right where he is now and he becomes the median, it could pull the court quite a bit to the right,” said Lee Epstein, a law professor and political scientist at Washington University in St. Louis. “He will prefer to try to form a coalition with the other conservatives, although he will occasionally side with the liberals.”

“It could manifest in compromise positions in his taking substantively more moderate stances on issues,” Mr. Dorf said. “He might want to go slowly before taking an abortion case or an affirmative action case, or a same-sex marriage case to potentially overturn Justice Kennedy’s handiwork.”

A 2015 study in The Journal of Legal Studies, and related data ranking the justices in ideological order, found that Chief Justice Roberts voted in a conservative direction 58 percent of the time over the last decade, but leaned right when it mattered most. “He is a reliable conservative in the most closely contested cases but moderate when his vote cannot change the outcome,” the study said.

Mr. Dorf said that Chief Justice Roberts might act differently now that Justice Kennedy — often the deciding vote in those cases — was gone, much like congressional leaders spare their most vulnerable members of Congress from casting deciding votes on politically difficult issues.

But William Baude, a law professor at the University of Chicago who clerked for Justice Roberts, said there is no reason to believe that he will evolve with a newly constituted court.

“I don’t think he’s really changed — he’s been the same chief justice all along — and people who want someone who’s ideologically reliable are sometimes going to be disappointed by that,” Mr. Baude said. “People made fun of him for describing the role as an umpire calling balls and strikes, but I think that’s really the way he sees it.”

During the Supreme Court term that just ended, Justice Roberts voted with the majority in divided cases more often than any other justice.

The result was a set of deeply conservative rulings, including one upholding Mr. Trump’s travel ban and another dealing a sharp blow to public unions. But he is also regarded as an incrementalist who prefers a slow, step-by-step process for staking out a position, shying away from big, bold precedent-shaking decisions.

“On a lot of major decisions, he already has been the swing vote, so it’s not an entirely new scenario,” said Carrie Severino, the chief counsel and policy director at the Judicial Crisis Network, a conservative legal group. “He is someone who would rather answer smaller questions.”

The Washington Post’s Christopher Ingraham is among those who think Roberts is likely to become more Kennedy-esque in the future even as the Court drifts rightward, while FiveThirtyEight talks about what it might mean to have the Chief Justice as the Court’s center:

A Supreme Court with someone like Roberts in the ideological middle would not be unprecedented. O’Connor, for example, was in the middle before Kennedy, and she often scored as more conservative than Roberts does now. The same goes for Lewis Powell, a Nixon appointee, and Byron White, a Kennedy appointee, both of whom were the median justice of their day and clocked scores to the right of Roberts’ score today. And back in the late 1940s and early ’50s, many members of the court sat tightly bunched around an ideology score that’s slightly more conservative than that of Roberts in recent years.

But some of this empirical analysis may mask the true conservative nature of the future court. Looking at the raw numbers, Roberts’s ideology has been steadily drifting left since he joined the court in 2005. But this could be due in part to the fact that the court has in recent years taken up more of the sharp questions that conservatives want it to take up. Voting with the court’s liberal bloc on a right-wing issue would shift a justice’s score toward the more liberal side, even if the position they took would still generally be considered conservative. So perhaps the very benchmark the data revolves around is shifting.

It’s also possible that Roberts appears more liberal because, as the chief justice, he has an incentive to join the majority in cases where his vote alone cannot change the decision; this tactic allows him to influence decisions he doesn’t fully agree with, rather than simply dissenting. (The chief justice assigns which justice will write the opinion for whichever group he votes with, so he can indirectly shape a ruling by assigning the opinion to himself or a justice sympathetic to his views.)

The departure of Justice Kennedy is clearly going to have a huge impact on the future direction of the Court, perhaps for as much as the next several decades. As both James Joyner and myself have noted in the days since he announced his retirement, Justice Kennedy proved to be the decisive vote in a number of the Court’s landmark cases. This has been especially true over the course of the past decade since Justice Sandra Day O’Connor retired and Kennedy assumed her position as the Court’s fulcrum in high-profile cases where the result was divided based on ideology. It has been even truer in cases dealing with the rights of LGBT Americans given the fact that Kennedy was the decisive vote in cases such as Roemer v. Evans, Lawrence v. Texas, United States v. Windsor, and, of course, Obergefell v. Hodges. While Kennedy has been a largely conservative Justice himself, he is going to be replaced by someone who is more conservative than he is and more likely to side with the conservative side of the Court. As a result, while it will take some time to evaluate what a Roberts Court without Kennedy will be like, it’s obvious that, just as every new Justice brings something to the Court that causes it to change in some way, Justice Kennedy’s replacement, regardless of which member of President Trump’s list it might be, will do the same. As a result, the Court will become more conservative on a number of issues and the center of the Court will shift right to some degrees.

While it’s far too early to say exactly what it means, it seems apparent that Roberts is indeed destined to become the ideological center and in many cases the deciding vote in high-profile cases of the Supreme Court going forward. It’s possible, of course, that whoever Trump ends up selecting to replace Kennedy may take on that role, but given what we’ve seen from Gorsuch so far that’s probably not going to be the case. Additionally, we already have evidence that Roberts is likely to become the new Kennedy based on his record. While Justice Kennedy has been the most notable “swing” Justice on the Court over the past decade or more, there have also been several instances where the Chief Justice has provided the crucial vote that decided the outcome of a particular case, most notably when he has crossed the ideological aisle and sided with Justices Ginsburg, Breyer, Sotomayor, and Kagen. The most important of these cases, of course, was the 2012 decision in National Federation Of Independent Business v. Sebelius 567 U.S. 519 (2012) in which Roberts crossed the aisle and, with the support of that liberal wing of the Court, upheld the Affordable Care Act against a constitutional challenge. The Chief Justice played largely the same role three years later in King v. Burwell 576 U.S. __ (2015)  where Roberts, joined by Kennedy and the Court’s liberals upheld the PPACA against another challenge based on a different theory. The intervening years have shown Roberts playing a similar role in other cases, most of them not exactly high-profile cases of course but still evidence of his willingness to step away from the conservative wing of the Court on a far more frequent basis than Justices Alito and Thomas (It’s still too early to judge Gorsuch since he’s only been on the Court a year.)

In addition to the above, the fact of the matter is that there simply isn’t any other candidate for the new center of the court other than Roberts. Justices Alito and Thomas have generally voted together on the conservative side of the Court, although there have been times when Thomas has crossed the aisle in some cases or otherwise differentiated himself from the conservative wing that he’s generally been considered a part of. One of the most notable examples of that came in a case called Virginia v. Black 538 U.S. 343 (2003)  in which the Court was ruling on the constitutionality of a Virginia statute banning cross-burning such as that done by the Ku Klux Klan. The Court found the statute unconstitutional under the First Amendment, but Justice Thomas dissented arguing that the statute was aimed at restricting conduct, not speech. Generally speaking, though, Thomas and Alito have been largely reliable conservative voices on the Court and that seems unlikely to change. It’s possible, I suppose, that Justice Gorsuch could end up becoming something of a swing vote in the future, and he has sided with the liberal wing of the Court in a handful of cases over the past year, but it’s far too early to make any predictions on what he may become in the future. Similarly, it’s far too early to predict what role to expect from President Trump’s impending nomination. Given that, Roberts will inevitably become the Court’s swing vote on a number of cases, and that’s likely to have a big impact on the Court’s direction going forward.