The Class Clown Edition OTB Caption ContestTM is now over. 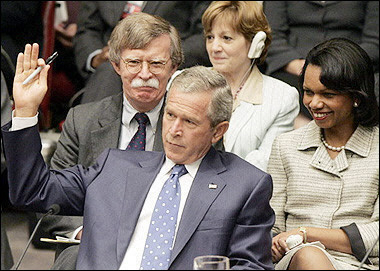 First: DL – Sorry about your indictment Mr Delay. Did anyone else have a bad week?

Second: Anodyne – President punk’d by fake interpreter Bill Murray who translates Kofi’s welcome to new delegates as “who cried when Old Yeller got shot at the end?”

Third: Brandon Jaynes – Who here thinks the U.N. is a complete waste of time and money?

McGehee – “Dang it, I never could get the hang of that Spock salute!”

John 3:16 – OK, I’ll ask a second time (serious responses only this time) who truly believes that Islamic moderates will one day take back their religion?

Maggie – Excuse me, how do I dial up “Tex-ish” on this translator thingy?

“You don’t need to raise your hand to use the restroom Mr. President, just write me a note.”

“Hey I have an idea let’s put Captain Kangaroo and Oprah, here behind me, in charge of the UN.”

“Uh, I’d like to use my Phone-a-Friend on this one Regis.” 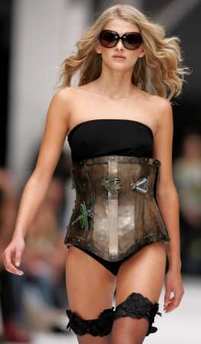 And if that doesn’t sate your sexist fantasies there’s always Riding Sun’s contest.