1st: Rodney Dill. Multiple submissions, most notably “Sorry Miss, American Idol auditions are closed.” and “Merely returning home from the all night buffet at Ho-Jo’s, Ally Kyda could not have foreseen the bizarre chain of events that would transpire when she introduced herself to the nice looking policeman.”

2nd: Kevin Aylward, “Shirley Hemphill is forcibly removed from the big budget Hollywood remake of “What’s Happening”. Producers said they were going in a different direction with the quick-witted waitress character for the movie. Shirley did not take the news well.”

3rd: Hodink, “Prison was not kind to Martha Stewart.”

Graham Lester, “University of Michigan lawyers have discovered a loophole in the Supreme Court’s decision and the enforced enrollment of minority students has begun in earnest.” 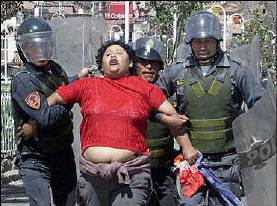