The Brokeback Mohammed Edition OTB Caption ContestTM is now over. 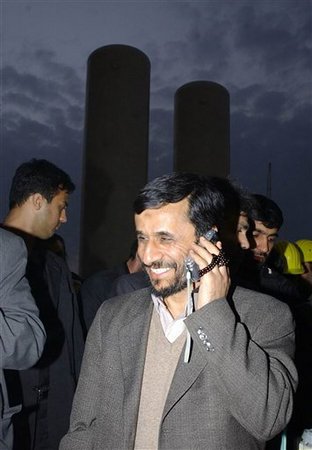 First: Laurence Simon – “Mr. President? This is the Mossad. So, how do you like our cell phone?”

The Man – “Jack Bauer? I never heard of you”

Sgt. Fluffy – For the last time infidel! I am not Yakov Smirnoff!!!

“Why yes my phone does have a GPS locator, why do you ask President Bush?”

“No, I don’t know whats covered with Sand and glows in the dark.”

“Yes yes, goats milk, the two towers are filled with lots of fresh goats milk, if you know what I mean”

“Yes you hear everyone here laughing, my ringtone is Shania Twains’, Man! I feel like a woman.”

“… and who is this Prince Albert?”

The Thursday contest is already on its way to Valhalla