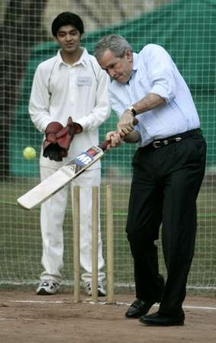 Second: Elmo – Bill Clinton isn’t the only one with a sticky wicket.

Third: charles austin – After the second over, Bush started taunting the bowler and suggested he “bring it on” instead of bouncing it in front of him every time.

Maniakes – Man, the umpire’s calling an awful lot of low strikes today. And what’s with the sticks in front of the catcher?

ICallMasICM – Another popout to the shortstop. Back to the Bush leagues.

The Man – Bush learned to swing the paddle during his days at Yale, hazing John Kerry in the Skull & Bones fraternity.

Ken – Bush demonstrates why the Texas Rangers have always sucked.

“Bring it on Gunga-Din Baby”

“…and put some curry on it next time.”

“Hmmm… hitting things with a paddle, I bet Jimmy Carter loved this game.”

When Bush brought in the Rangers (Army, not Texas baseball) the opposing team was quickly subdued. (but they did start blowing up local mosques)

Other Contests running this week
Riding Sun is celebrating a successful proctology exam.