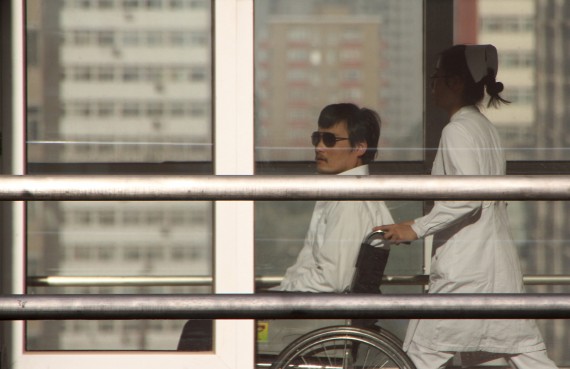 The blind Chinese dissident who set off a diplomatic broohaha after seeking refuge at the U.S. Embassy in Bejing is headed to the United States:

BEIJING — Chen Guangcheng, the blind legal defender who made a dramatic escape from house arrest and whose decision to seek refuge in the American Embassy here jolted American-Sino relations, left China aboard a commercial flight bound for Newark on Saturday.

Mr. Chen and his family departed around 5:30 p.m. on a United Airlines flight after facing earlier delays. The Chens, accompanied by American officials, were brought onto the plane shortly before takeoff and seated in the business-class cabin. Flight attendants drew a curtain around their seats and barred other passengers in the cabin from using the toilet while the plane was on the runway.

In a statement, American officials obliquely praised the Chinese government for its cooperation in resolving what had become a diplomatic headache for both sides. “We also express our appreciation for the manner in which we were able to resolve this matter and to support Mr. Chen’s desire to study in the U.S. and pursue his goals,” Victoria Nuland, a State Department spokeswoman said.

Speaking by cellphone before he boarded the flight, Mr. Chen told friends he was excited to leave China but that he was also worried about the fate of relatives left behind. “He’s happy to finally have a rest after seven years of suffering, but he’s also worried they will suffer some retribution,” said Bob Fu, president of ChinaAid, a Christian advocacy group in Texas that championed Mr. Chen’s case.

Mr. Fu, who spoke to Mr. Chen several times on Saturday, said the family had no idea they were leaving — or where they were going — until officials notified them to pack up their few belongings.

They were driven directly to Beijing International Airport by employees of Chaoyang Hospital, where Mr. Chen was being treated for intestinal problems and for the foot he broke during his escape. Mr. Chen told friends that he and his family were handed their passports by Chinese officials shortly before they boarded the plane.

The family waited for their flight in an area separated from other passengers. Airline officials increased security on the flight, and reporters were told they would not be able to speak to Mr. Chen during the 13-hour trip to Newark.

In the two weeks since he left the embassy, Mr. Chen has expressed concern for relatives still at the mercy of local officials in Shandong. American diplomats said Chinese officials rejected a list of 13 people, many of them family members, that Mr. Chen had said he wanted protected from harassment.

A nephew, Chen Kegui, is in police custody accused of slashing and injuring men who broke into his family’s rural home last month in their search for Mr. Chen. The nephew faces a possible death sentence and has been denied access to his lawyers. His father, Chen Guangfu, has said he was tied to a chair and beaten for three days by interrogators seeking information on his brother’s whereabouts.

On Saturday, however, many Chinese dissidents and rights advocates were celebrating, among them Teng Biao, a prominent rights lawyer and friend who had advised Mr. Chen to go abroad.

“I am very happy Mr. Chen will finally have a chance at a normal life,” he said

The fact that Chen and his family are being allowed to leave is a rather extraordinary development itself, and possibly a sign of a change in how China handles these matters now that its leadership realizes that the world is watching what they do.