Add this to the list of things for parents to worry about: Car safety seats for children over 65 pounds are not adequately tested.

Add this to the list of things for parents to worry about: Car safety seats for children over 65 pounds are not adequately tested.

Seats for children who weigh more than 65 pounds — a growing part of the car seat market, partly because of the increase in childhood obesity — are not held to any government safety requirements. Seats for smaller children and infants are regulated only for their effectiveness in front-end collisions.

That’s because the National Highway Traffic Safety Administration has yet to develop a lifelike child crash test dummy that can accurately ensure that seats for heavier children provide the protections promised.

Problems with developing child dummies are also a key reason why seats for all children have no federal requirements for effectiveness in side-impact, rear-end and rollover collisions, car seat experts said.

Car seat manufacturers “self-certify” that their seats meet the safety standards that do exist. The NHTSA tests 75 to 90 models each year, said Ronald Medford, the agency’s deputy administrator. Those that do not comply with federal rules are recalled.

The NHTSA only tests for crash protections that are regulated. That leaves parents to rely on manufacturers’ assurances for the higher weight seats and for side-impact protections, seat-belt fit and other potential injury factors.

Safety experts say a lack of funding for researching and developing lifelike child test dummies has caused the NHTSA’s oversight of safety seats to lag years behind in a highly competitive industry that evolves to meet demand.

Car seats with harnesses designed just a few years ago to hold children who weigh up to 65 pounds are now marketed for up to 85 pounds. Manufacturers say they are catering to parents of overweight children, some who reach 40 pounds by 2-1/ 2 years old — too young and often too short for the next step, a belt-positioning booster seat.

Critics say the lag in government oversight has left some higher-weight seats vulnerable to being used incorrectly. The ­NHTSA has not determined whether seats for children 65 pounds and over could overload vehicles’ LATCH anchor and tether restraint systems. The LATCH (lower anchors and tethers for children) systems, installed in new vehicles since 2002, were designed to secure safety seats holding children 48 pounds or less, according to automakers.

As parents of relatively recent vintage will attest, car seats are a giant pain in the butt. Not only is the information about relative quality murky but proper installation is crucial–and tricky.

The news is not, however, all bad.

Safety advocates and child seat researchers say they have not noticed any problems with higher-weight seats in real-world crashes. Most say they are focused on persuading all parents to use child safety seats and teaching them how to do so correctly.

Safety seat use led to a 71 percent drop in infant deaths and a 54 percent reduction in crash­related fatalities for 1-to-4-year-olds, according to NHTSA statistics comparing 1988 and 1994 crash data.

Still, researchers who study the impacts of motor vehicle collisions on children say the pace of dummy development has complicated efforts to make all seats as safe as possible. Motor vehicle crashes are the leading cause of death for children 3 to 14, according to the NHTSA: Of the 322 children 4 and younger killed in collisions in 2009, 229 were in some kind of restraint. Researchers say many children killed in car seats or boosters are in crashes considered catastrophic or in restraints that were seriously misused.

And, as someone who grew up in the pre-car seat era, this is interesting:

The difficulty in developing sophisticated child test dummies dates to the late 1970s, when states began requiring that children, who were held in laps or left to slide across seats, be secured in specialized restraint systems.

Adult-size dummies are based on 40 years of research, including data from actual collisions and crash tests using adult cadavers. However, researchers said, children are in vehicles less often than adults and, in turn, are involved in far fewer collisions. That leaves less real-world crash data to help determine how much force their bodies can tolerate before injuries occur. Car seat researchers said dummy designers have been reluctant to use children’s cadavers for tests.

Without that information, researchers said, child dummies have been designed primarily by scaling down adult dummies and using medical data from living children. Developing a lifelike dummy whose test results can be replicated can take decades and cost several million dollars, researchers said.

Given that we successfully put men on the moon a decade before we started requiring car seats for kids, you’d think our scientists could have figured this one out by now. Human physiology is apparently more complicated than manned space flight. 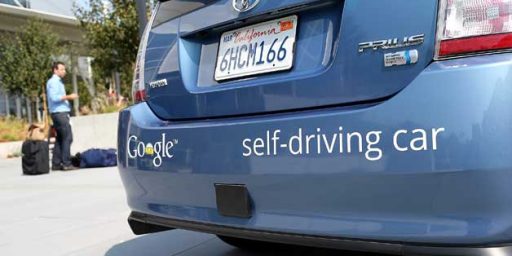