Chuck Norris says John McCain is too danged old to be president.

Norris, an ardent supporter of Mike Huckabee, told reporters he believes serving as president accelerates the aging process 3-to-1.

“If John takes over the presidency at 72 and he ages 3-to-1, how old will he be in four years? Eighty-four years old — and can he handle that kind of pressure in that job?” Norris said, as Huckabee looked on.

“That’s why I didn’t pick John to support, because I’m just afraid the vice president will wind up taking over his job within that four-year presidency,” added the action star.

Huckabee himself avoided offering his own opinion on whether McCain is fit for the presidency, saying “Only John McCain and his hair dresser know for sure.”

The hairdresser line doesn’t make sense, given that McCain’s hair has been snow white for as long as I can remember. (Indeed, it’s recently occurred to me that McCain should simply shave his head, which would instantly make him look 20 years younger). It’s also rather amusing coming from Norris, a man who’s less than two months away from his 68th birthday and still playing an action hero badass.

Still, there’s no question that McCain would be the oldest man ever elected for the first time if he wins. He turns 72 in August, so he’d beat Ronald Reagan’s record of 69 years, 11 months by over two years. Further, if the old adage “it’s the miles, not the years” is true, McCain’s even older. If anything ages a man faster than four years in the Oval Office, it’s five and a half years being tortured by the Viet Cong.

It’s hard to imagine McCain serving out two terms and starting off as a one-term guy could transform him into a lame duck quickly.

If it were a toss-up between McCain and Huckabee, then, Norris’ argument would be worth consideration. Indeed, it’s presumably already weighing into people’s calculations even if it’s largely unspoken. But is there anyone out there really torn between these two men? If one’s inclined to vote for Huckabee, there are plenty of things ahead of “he’s too danged old” on the list of reasons not to support McCain. Conversely, if one is leaning McCain, Huckabee is presumably your last choice among the remaining GOP candidates.

The bottom line is that we don’t know how well any of these people will hold up in the White House. Ronald Reagan and Bill Clinton seemed to feed off the office, drawing energy from the spotlight. Everyone else in my memory aged rapidly. Who’s to say that McCain isn’t in the first camp? Certainly, he seems to thrive on campaigning; he’s more energized now than he was two years ago. 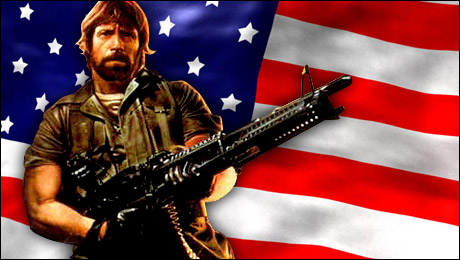