Coming to THE Big Screen Near You

Your guide to the Leonid meteor show (MSNBC)

Annual celestial firework could peak on Nov. 17 or 19 in a moonless sky 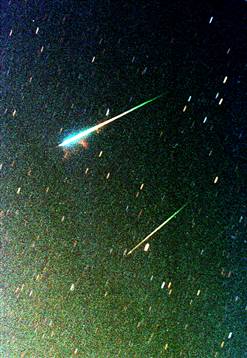 In the 2004 Observer’s Handbook of the Royal Astronomical Society of Canada, meteor experts Margaret Campbell-Brown and Peter Brown indicate that this yearÃ¢€™s peak activity should occur on the morning of Nov. 17.

They cite 09:00 GMT, which corresponds to 4 a.m. ET and 1 a.m. PT. This is the moment when Earth will be passing closest to the orbit of the long-departed comet, and when our planet seemingly is most likely to encounter some residual comet material. This time is highly favorable for North Americans, especially those in the eastern United States and eastern Canada.

I never seem to be able to get away from the Detroit area this time of year. My mom’s farm in Wisconsin is perfect for star gazing, but it’s too far for just an evening jaunt.

UPDATE: INBB has linked to some additional Leonid information and I’ve found some more at the Astronomy Picture of the Day. I always check the APOD site every few days, they really have some great astronomy pictures. Just type “APOD” into Google and click on “I’m feeling Lucky.”