Western athletes who've complained about the conditions at the Commonwealth Games are coming in for a firestorm of criticism. 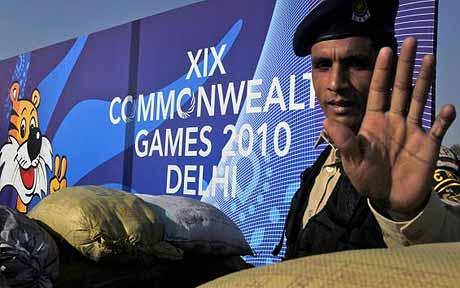 As many of you are doubtless aware, there has been a minor flap in recent days as athletes from around the world have threatened to boycott the Commonwealth Games, citing unsafe conditions in Dehli.  A few stars have indeed pulled out of the games and some 400 others who have showed up have gone to the infirmary for various ailments related to the sheer squalor of the place.  And the Australian government has issued a security alert citing high risk of terrorist attacks.

Edward H. Carpenter, the editor of La Riposte, says this is a case of Slumdogs vs. Millionaires, as athletes from wealthy nations whine about conditions far better than that  in which millions of Indians live on a daily basis.

The real story, that of thousands of poor Indians being displaced as their slums were razed by bulldozers to make Commonwealth athlete and guest housing more presentable was hijacked by the steady stream of athletes boycotting the games because the housing and security (from accidents, crime, and disease) were not up to Western standards. But the housing, security, and healthcare available to those athletes, even under the worst circumstances, are an order of magnitude better than the majority of citizens in the host country are obliged to live with every day – and similarly considerably better than many citizens of visiting Commonwealth countries such as Bangladesh, Cameroon, Malaysia, and Nigeria.

Notably, the countries complaining about the conditions in New Delhi have nearly all been from the more privileged of the Commonwealth nations – those with predominantly white populations and high standards of living. The source of the problem can be seen by looking back at the start of the games – which were originally called the British Empire Games in 1930, and only took on their new and somewhat more egalitarian title in the 1960s. But the real problem is the dual standard that remains worldwide as a result of the colonial imperialism without which, there would be no games, and no problem.

Colonial possessions, including India were systematically exploited for resources, a trend that continues to this day, and there is some irony in the fact that a nation where so many still live in abject poverty would spend 7.5 billion dollars on an athletic event where the only common bond shared by most of the 54 member states is that they were colonized or had their indigenous population exploited by Great Britain for over a century.

Perhaps these games will serve to highlight for the privileged upper-class of the world that the conditions under which they would not deign to live for a few weeks are the daily reality for billions of their fellow humans around the world who live on less than $1.25 per day.

Charli Carpenter [so far as I know, no relation] terms the athlete’s whining “hypocrisy,” especially in light of  last week’s bridge collapse.    But that’s a non sequitur.   The fact that there are millions of people living in squalid and unsafe conditions may make this controversy a teachable moment.  But, surely, athletes from societies that are comparative healthy have no moral obligation to subject themselves to significant hazards just because others have it rough?  Cambodian children risk getting limbs blown off by decades-old land mines on a daily basis.  Nobody’s proposing holding the next Olympics on those fields to teach the bloody white bastards a lesson.

Not to be outdone, Spiked editor Mick Hume takes to the pages of  The Australian to insinuate that all the complaints are mere racism or some desire to put the uppity wogs in their place.

Why did the British non-sporting media suddenly splash sensational stories of “filthy” living quarters and unfinished buildings and “reports” that foreign athletes could be at risk from attack by everything from dengue fever and snakes to terrorists? Because it gave the old boys of the Mother Country a rare opportunity to look down on the uppity Indians.

This shitstorm of self-righteousness about bad smells and a broken bed seems a bit pathetic, really. Once the rulers of the British Empire justified keeping their dark-skinned subjects in their place through the politics of national and racial superiority, backed up by the military might of the Royal Navy and the army. Now it seems the only ideological weapons they have to demonstrate the alleged inferiority of Indians are the whiny politics of the health-and-safety police.

The Commonwealth Games are, of course, themselves a symbol of the decline of Britain’s power and influence in the world, and the problems this poses for the elites in knowing who they are anymore. The idea of a sporting competition for the nations of the British Empire was first proposed at the peak of its Victorian power in The Times in 1891, as a “Pan-Britannic-Pan-Anglican Contest and Festival every four years as a means of increasing the goodwill and good understanding of the British Empire”.

As comedian Frankie Boyle observed last week, the migrant labourers building these facilities have been paid a pittance and forced to live in grim camps while they labour to make nice luxury apartments for teenage gymnasts and synchronised swimmers. In which case, it might seem entirely reasonable if they had crapped in the beds and hooked the electricity up to the taps.

One British team’s official, arriving after the emergency clean-up operation in the athlete’s village, observed sniffily that the facilities were still three-star rather than five-star. Yet even three-star comforts seem rather too soft for what are meant to be hard young men and women athletes at the peak of their fitness. Surely, something a bit more Spartan would be appropriate.

Why not stick them in bunk beds in old-fashioned military barracks? After all, that was what the hard-up British authorities did with male competitors at the 1948 London Olympics. Although they did generously allow the athletes a bit of extra grub in those dark days of postwar rationing.

The juxtaposition of privileged athletes and indescribably poor folks doing the dirty work in advance of their visit is stark.   But it’s not at all clear why 20-something world class athletes are culpable for the sins of the colonial era.  It’s hardly unreasonable that, if the norm at these things is first rate accommodations, that they’d recoil at filth, stench, and disease — irrespective of what the brave lads of ’48 endured.