Comparing Athletes Through The Ages

Slate asks "How Badly Would Usain Bolt Destroy the Best Sprinter of 1896?" and answers with an odd "visualization" of unexplained methodology.

Slate asks “How Badly Would Usain Bolt Destroy the Best Sprinter of 1896?” and answers with an odd “visualization” of unexplained methodology. Not surprisingly, sprinters and swimmers of today are much faster than their predecessors. Indeed, in many events, the competitors finish in exact order of their year of competition.

Two things stand out, though. First, this hasn’t held true in the long jump. For both men and women, the best performances came decades ago. Second, in all events compared, today’s women are better than the men of yesteryear. Florence Griffith-Joyner’s 100-meter dash of 10.54 in 1988 beats the gold medal times of Thomas Burke (1896), Archie Hahn (1904), and Harold Abrahams 1924). Jesse Owens’ 1936 time would still blow away any woman, though, and today’s high school champions are faster than Owens. 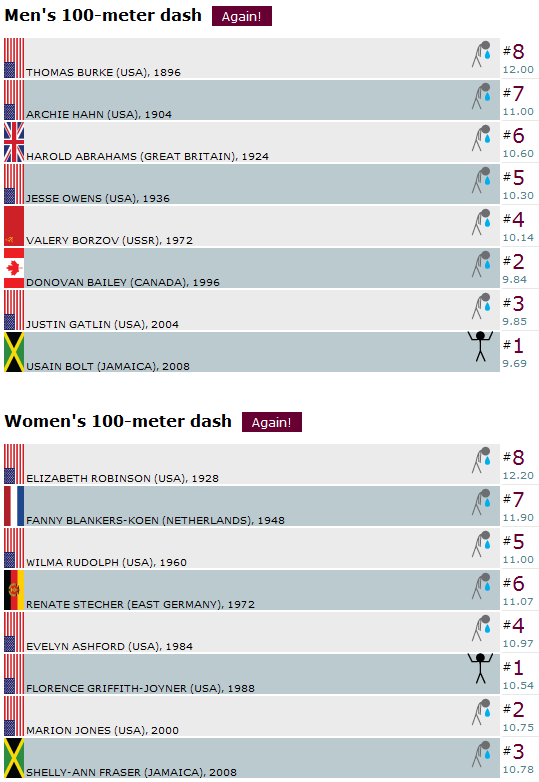 The comparisons over time, however, are not entirely fair. Aside from the fact that today’s Olympians begin training much earlier—specializing in a single sport, receiving professional coaching, and typically devoting full time to their sport—there are vast differences in equipment and playing field. Today’s track events are held on rubberized surfaces engineered to maximize speed and the athletes wear clothing that minimize weight and wind resistance; it’s silly to compare their times directly with people running on cinder wearing loose shorts and heavy shoes.