Country music legend Buck Owens has died at the age of 76. 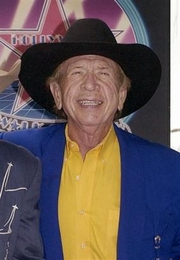 Singer Buck Owens, the flashy rhinestone cowboy who shaped the sound of country music with hits like “Act Naturally” and brought the genre to TV on the long-running “Hee Haw,” died Saturday. He was 76. Owens died at his home in Bakersfield, said family spokesman Jim Shaw. The cause of death was not immediately known. Owens had undergone throat cancer surgery in 1993 and was hospitalized with pneumonia in 1997.

His career was one of the most phenomenal in country music, with a string of more than 20 No. 1 records, most released from the mid-1960s to the mid-1970s. They were recorded with a honky-tonk twang that came to be known throughout California as the “Bakersfield Sound,” named for the town 100 miles north of Los Angeles that Owens called home. “I think the reason he was so well known and respected by a younger generation of country musicians was because he was an innovator and rebel,” said Shaw, who played keyboards in Owens’ band, the Buckaroos. “He did it out of the Nashville establishment. He had a raw edge.”

Owens, elected to the Country Music Hall of Fame in 1996, was modest when describing his aspirations. “I’d like to be remembered as a guy that came along and did his music, did his best and showed up on time, clean and ready to do the job, wrote a few songs and had a hell of a time,” he said in 1992.

In addition to music, Owens had a highly visible TV career as co-host of “Hee Haw” from 1969 to 1986. With guitarist Roy Clark, he led viewers through a potpourri of country music and hayseed humor. “It’s an honest show,” Owens told The Associated Press in 1995. “There’s no social message — no crusade. It’s fun and simple.”

From his Hall of Fame bio: 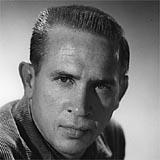 Singer, songwriter, and guitarist Alvis Edgar Owens Jr. ruled the country music scene for a period in the mid-1960s, producing a clear, twangy, danceable sound that he repeated across dozens of chart-topping singles. Though he would later become a fixture on television through the success of Hee Haw, Owens is best remembered by fans and those younger stars he has influenced for timeless hits like “Act Naturally” (#1, 1963) and “My Heart Skips a Beat” (#1, 1964).

During a period he spent in the Seattle area in the late fifties, Buck struck up a musical relationship and personal friendship with a young fiddler, Don Rich. Their partnership was crucial in Buck’s career, and Rich stayed with Owens as musician, guitarist, and leader of Buck’s band, the Buckaroos, until his death in 1974.

Unlike most other artists during the heyday of the Nashville Sound, Owens would virtually always record with his road band, giving his records both a distinctive sound and a live feel. From 1963 to 1967, during the peak of Owens’s commercial and artistic career, Owens and Rich were joined by pedal steel player Tom Brumley, drummer Willie Cantu, and bassist Doyle Holly on all of Owens’s records and on the Buckaroos’ own marginally successful releases on Capitol. While Nelson nominally produced his sessions, Owens would shape and control the band’s sound and songs. These factors, and Owens’s desire to keep the same winning song and arrangement formula, helped to create the conditions for his signature style based upon simple storylines, infectious choruses, twangy electric guitar, an insistent rhythm supplied by a drum track placed forward in the mix, and high two-part harmonies featuring Owens and Rich.

Rather than using the stolid session musicians most country singers relied on, Owens put together a solid road band and brought it into the studio (the band was eventually named the Buckaroos by a brooding ex-con who played bass in the band for three weeks: Merle Haggard). He did it because he wanted the live show to sound like the records, but the result, happily, was the opposite: the records sounded like a live band. Using what he’d learned about AM radio sound in Washington, Owens mixed his records using tiny speakers so he’d know what they’d sound like in the real world. The guitars fairly shimmered. The vocal harmonies cut like diamonds. If you were listening to the radio, you knew a Buck Owens song in an instant. It jumped right out of the speaker.

Owens was named the most promising country and western singer of 1960 by Billboard, and his top-10 duets with Rose Maddox in 1961 earned them a nod as vocal team of the year in DJ polls. But it was in 1963, after updating his sound again, that Owens’ career went ballistic. He moved away from the traditional country shuffle to a more upbeat, driving style (“…like a freight train coming through your livingroom,” as Buck said) with the single “You’re For Me” in late 1962. A few months later, “Act Naturally” became his first No. 1 hit. It was rock ‘n’ roll with a country feel. The Beatles later covered it without changing much of anything. It crossed over to the pop charts, and it began an astonishing run: for the next four years, every Buck Owens single went to No. 1. Fifteen in a row. At one point, he had a B-side, “My Heart Skips a Beat,” alternating in the top spot with its A-side, “Together Again.” “Love’s Gonna Live Here,” the follow-up to “Act Naturally,” was No. 1 for 16 weeks. He even sent an instrumental — the signature “Buckaroo” — to No. 1. The streak finally ended in October 1967 when his tribute to his fans, “It Takes People Like You (To Make People Like Me),” underachieved, stopping at No. 2. The next single, “How Long Will My Baby Be Gone,” went to No. 1, as did three more songs in 1969.

He played sold-out shows at Carnegie Hall and the London Palladium. In 1968 he played at the White House by special invitation of President Johnson, and he blew away the hippest room in America, the Fillmore West. Creedence Clearwater Revival, the biggest American rock band of the period, listed “listenin’ to Buck Owens” as one of life’s pleasures in “Lookin’ Out My Back Door.” Beginning in 1966 he hosted a syndicated TV show, “Buck Owens’ Ranch,” for six years. He hit on a trademark when he painted his guitar red, white and blue. And he was smart with his money: He ran his own music publishing company and, with his manager, Jack McFadden, a booking agency. He bought radio stations and opened a recording studio in Bakersfield, which country music writers now called “Buckersfield.”

He was no poet. His lyrics were simple and direct, relying more on clever wordplay than deep insight. Merle Haggard had since stepped out of his shadow to become the so-called “bard of the working man” (not to mention marrying Bonnie Owens, who had a few minor hits of her own). George Jones was a far better singer, and even his own boy Don Rich was a better guitarist. Unlike many fellow artists, Owens avoided drugs and drink, living as a quiet family man. But Owens was a rebel at heart doing his music his way, shunning the conventions of Nashville, and fairly owned country in the ’60s.

In 1969, he agreed to co-host what critics called “a hillbilly version of Laugh-In” with Roy Clark on CBS. Hee Haw started as a special, then it was a summer replacement, and then finally it earned a spot on the schedule. It went to the top of the ratings. Critics said it was ridiculous. But the biggest stars in country music came on, and the show treated the music seriously. CBS canceled it in 1971 in a move away from rural shows, but it went on and on in syndication. A generation, and then another, grew up knowing Buck Owens as the co-host of Hee Haw.

Gary Kaufman had an interesting Owens profile, “The Baron of Bakersfield,” as part of Salon’s Brilliant Careers series in 1999. It begins,

A decade before Waylon and Willie and the boys became revered as “outlaws” for shunning Nashville and basing their careers in Texas, Buck Owens changed country music and became its biggest star from a flat little oil town called Bakersfield, Calif.

He was a rebel without a dark side — a polite, law-abiding, hard-working family man who invested his earnings prudently, stayed away from drugs and drink, preferred working with musicians who did the same and spent 17 years hamming it up as the co-host of the corniest show on TV, “Hee Haw.” But he was a rebel nonetheless, insisting on playing his own music, his own way, with his own band and in his own town at a time when country singers were supposed to go to Music City and sing over sweet, canned backing tracks laid down by session players and string sections. They named the hard, guitar-driven honky-tonk sound that purists still call “real” country after his town, but the Bakersfield Sound is the sound of Buck Owens. 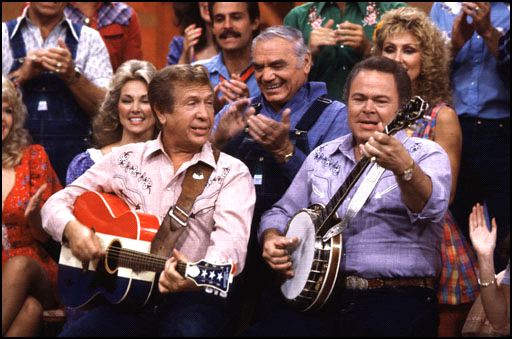 Despite his remarkable influence as a musician, Owens is doubtless best remembered by those under 50 for “Hee Haw.” Both he and his co-host Roy Clark were much better musicians than comedians, but their pickin’ and grinnin’ overshadowed the music on the show.

Update (3/26): The Nashville Tennessean has a long obituary.

Though many knew him primarily for his role on the popular syndicated television series Hee Haw, Mr. Owens’ guffawing presence on that show did not hint at his musical significance. Before Hee Haw’s 1969 premiere, Mr. Owens had redefined the sound of country music. He had already worked in television, giving future superstar Loretta Lynn her first media exposure on KTNT in Tacoma, Wash. He had already brought the snarling, treble-heavy Fender Telecaster guitar to popularity.

He had established Bakersfield as a place where renegade artists made edgy country music that served as the sinewy anti-thesis of the lush, pop-leaning records coming from Nashville in the 1960s. He led his electrifying Buckaroos band to triumphant concerts overseas and at New York’s hallowed Carnegie Hall. He had inspired a British rock group called The Beatles to record a version of Mr. Owens’ hit Act Naturally, and he had done enough to ensure a lasting place in American music.

“I looked at CNN.com today and (the headline) said, ‘Hee Haw Star Buck Owens Dies,’ and it made me mad,” said country musician Brad Paisley, a longtime fan of Mr. Owens who became a friend of the legend’s. “This is a guy who influenced The Beatles. They covered him. He’s one of the most important country artists ever. That headline should say, ‘Music Legend Buck Owens Dies.'”

“He had come to the club early and had a chicken-fried steak dinner and bragged that it’s his favorite meal,” Shaw said. After dinner, Owens told band members he didn’t feel up to performing and decided to drive home. On his way to his car, fans on their way in told him that they had come from Bend, Ore., and that they were really looking forward to hearing him sing. Owens turned around and did the show. “He mentioned that onstage: ‘If somebody’s come all that way, I’m gonna do the show and give it my best shot. I might groan and squeak, but I’ll see what I can do,’ ” Shaw said. “He died in his sleep — they figure it was about 4:30 [a.m.] — probably of heart failure. So he had his favorite meal, played a show and died in his sleep. We thought, that’s not too bad.”

About all a man could hope for, really.