The politics is understandable but the result is damaging to the country.

Members of Congress haven’t had a pay raise in a decade, fearing political backlash. But the cascading effects are serious.

House Democrats are pulling a spending bill that would give lawmakers a pay raise for the first time in a decade amid a backlash from swing-district freshmen.

The House is still slated to consider the rest of an appropriations package for other agencies, including the Defense and State departments, but not the section concerning legislative branch operations.

A senior Democratic aide said that consideration of legislative branch spending will remain on hold as lawmakers discuss the pay raise issue.
Close to a dozen vulnerable swing-district Democratic freshmen had submitted or co-sponsored amendments to block the pay raise, underscoring the sensitivity of the issue.

Members of Congress have had their pay frozen since 2009, but some lawmakers in recent years, including House Majority Leader Steny Hoyer(D-Md.), have advocated for returning to annual cost-of-living adjustments.

The House was set to vote on a spending package that did not include language to block an annual cost-of-living adjustment as laid out by a 1989 ethics law. Members are poised to receive a $4,500, or 2.6 percent, raise starting in January 2020 unless they move to prevent it as they have over the last decade.

Rank-and-file members of Congress currently earn $174,000 per year. Members of leadership earn more, with the Speaker making $223,500 annually and the House majority and minority leaders earning $193,400.

The Congressional Research Service estimated that if members of Congress had received annual cost-of-living increases, the 2019 salary would be $210,900.

—The Hill, “House Democrats pull legislation that would give lawmakers raise“

Obviously, $174,000 is a lot of money even if you live in DC. Still, some are having trouble making ends meet.

Hoyer and other lawmakers in recent years have expressed concern that it’s becoming increasingly difficult for members of Congress to afford the cost of residences in both Washington and their districts, especially if they hail from a place where the cost of living is high.

Hoyer said Monday evening that he wants to craft a bipartisan agreement with Republicans so that it doesn’t become a campaign issue for vulnerable Democrats.

“I don’t want any of my members who are in tough districts subjected to that. So we’re not going to ask them to be subjected,” Hoyer told reporters. “We want to make sure we have a bipartisan agreement.”

Rep. Abigail Spanberger (D-Va.), who flipped a GOP-held seat last fall and was among the freshmen who signed on to an amendment to block the pay raise, expressed support for the delay.

“I’d rather continue in suspend mode than distract from all of the other good pieces of work that we’re doing. And that when we are voting to raise wages, I hope that it’s for teachers and community leaders and minimum wage workers before we turn our attention toward ourselves,” Spanberger told The Hill.

But she acknowledged that lawmakers should find a way to separately address the issues caused by the stagnant salaries for members of Congress, including lawmakers sleeping in their offices to save money on rent and the difficulty with retaining staff who can’t make more than their bosses but can make more money in lobbying jobs or elsewhere.

“I think there’s a lot of larger conversation that we really need to be having, particularly our staff members and the issue of members sleeping on their couches (which I don’t do),” Spanberger said. “I don’t want it to be a distraction from really all of the good things that are going to be in the appropriations bills we’re voting on this week.”

I’m not incredibly sympathetic to the notion that someone making $174,000 a year can’t afford an apartment in DC and a home in their district. Even those who represent Manhattan, San Francisco, and other extremely high cost of living areas should be able to maintain both. One doesn’t need a lavish place in both; pick a primary residence and then a modest place in the other.

Nor is the argument that, if we don’t pay Congressmen more they’ll go off to more lucrative jobs in the lobbying sector pass the laugh test. First, a lot of people take pay cuts for the influence and prestige of high-level government service. And it’s not like there’s a shortage of people willing to take the job at current rates. Second, we’re never going to pay them enough money that there aren’t more lucrative jobs to be had capitalizing on their influence. Third, it would make more sense to simply pass laws making it harder to join the lobbying sector right out of government employment. Fourth, there’s an argument to be made that we need more rotation in Congress, anyway, so encouraging people to stay for decades on end is counterproductive.

No, the real problem is that we tie the pay of judges, government executives, and congressional staffers to the pay of Congress. That makes it harder to attract and retain top-level talent to career positions.

We could simply decouple the two. There’s no reason that federal judges and senior executives couldn’t earn a salary higher than a Member of Congress or even the Speaker.

Or, we could simply make cost-of-living increases automatic and apply them across-the-board. Rather than making separate determinations for active duty military, Social Security recipients, civil servants, etc. we could have an independent commission calculate the break-even rate and apply it to everyone from the President to the Chief Justice to a Senior Executive to a boot private.

It’s possible that applying such a law to Congress would violate the 27th Amendment; it hasn’t been tested. But I’d argue that, so long as it didn’t go into effect until the subsequent Congress (January 2021) it would be fine even if it continued in perpetuity.

UPDATE: It also occurs to me that we could address the “What of Members who live in expensive districts?” issue the same way we do other federal employees: a static base pay plus a locality adjustment. Presumably, since Representatives and Senators work in DC, we’d give them the locality pay for the District. But we could, alternatively, decide that some percentage of a Member’s duties are in their state/district and give them the appropriate offset. And, again, this would likely solve the 27th Amendment issue since it would be done in perpetuity in a like manner with other government workers. 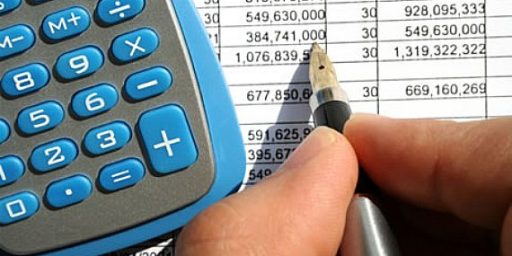