An unfunded mandate remains in place.

A federal appeals court on Wednesday refused to overturn the U.S. Centers for Disease Control and Prevention’s (CDC) national ban on residential evictions.

In a blow to landlords, a three-judge panel of the U.S. Court of Appeals for the District of Columbia said it would not lift a stay of a lower court ruling that had declared the eviction ban unlawful.

In language suggesting that the government’s eviction ban was lawful, the panel said the government “has made a strong showing that it is likely to succeed on the merits” of its appeal. The moratorium, which is set to expire on June 30, covers renters whose incomes were hit by COVID-19.

Ever since the CDC implemented the eviction ban in September, landlord groups, arguing that they are on the brink of financial collapse after going months without being paid, have filed challenges in courts across the country, with mixed results.

Legal experts said that Wednesday’s ruling means that for now, the eviction ban will remain in effect until its planned expiration date on June 30, though other court challenges are pending.

For low-income housing advocates, “This is a sigh of relief,” said Eric Dunn, director of litigation for the National Housing Law Project.

As the coronavirus pandemic moves into its second year, an estimated 7 million renters across the country owe $40 billion in back rent, utilities and fees, Moody’s Analytics estimates. This is more than twice the number of homeowners who lost their homes to foreclosure in the 2008 financial crisis.

Many eviction cases are pending, and some tenants may receive a lifeline from the $50 billion in rent relief approved by Congress, even though so far that aid has been slow to trickle out.

“If the CDC eviction moratorium expires or is overturned before those funds are expended, millions of renters would be at immediate risk of losing their homes. The result would be a historic wave of evictions, with tremendous, harmful consequences to individuals, communities, and our nation’s public health,” said Diane Yentel, president of the Low Income Housing Coalition.

Landlords and real estate groups that challenged the moratorium in court said the CDC lacked the power to impose it, and unlawfully took away their right to deal with delinquent tenants.

Both the policy and the law rather baffle me.

On the one hand, it’s obvious that, for humanitarian reasons, we don’t want people losing their homes because of a pandemic. On the other, it’s not the duty of property owners, who rely on rent to make a living or to finance the buildings, to serve as a social welfare agency. If the federal government wants to prevent homelessness, they should subsidize rents, not impose an unfunded mandate on landlords.

Beyond that, it’s not at all obvious where the government—much less the CDC—gets the authority to impose this policy. It’s rather obviously an unconstitutional “taking.” Indeed, at least two lower court judges have ruled that way. The government’s rationale, upheld here pending appeal, strikes me as thin:

The agency has said its authority comes from the Public Health Service Act, a nearly 80-year-old federal law that gives the federal government tools to stop the spread of communicable diseases. The act is clear about some measures the agency can take, such as isolation and quarantine of people who have or may have the virus. But it’s less clear on other measures, like the eviction moratorium, according to some legal scholars. Larry Gostin, a public health law expert at Georgetown University, said he believes the CDC has the legal authority to stop evictions, but acknowledges: “This is definitely a stretch because the Public Health Service Act doesn’t specifically mention evictions and traditionally CDC’s power doesn’t extend to housing.”

How in the world does preventing evictions stop the spread of disease?

The CDC has said the policy, first enacted in September and recently extended through the end of June, helps stop the spread of the coronavirus by limiting the number of people who lose their housing and have to live in shared housing, homeless shelters or on the streets.

That’s rather absurd. And, hell, by that rationale, every vacant rental or hotel room should immediately go to currently homeless people. At the expense of landlords and hoteliers, naturally.

Again, it seems perfectly reasonable for the federal government to step in here to prevent people from losing their homes. But, given how much money we’re already spending on mitigating economic losses from COVID, mortgage/rent support seems a rather obvious path for subsidy. And, frankly, one that makes a lot more sense than sending another round of checks to people who haven’t lost their jobs. 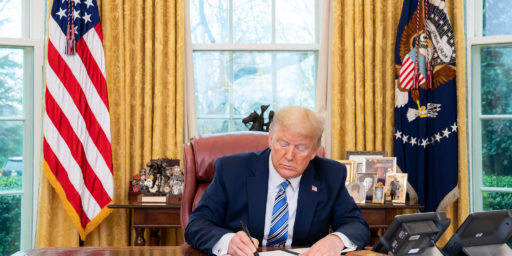 Three Memos and a Little EO